Sarah Jennifer looked out over her yard, her dark, vacant yard, and snorted.

Not one damned man decided to stick with her.  Well, except for Jeremiah, Todd and Dirk.  She knew why the guys really stepped off the property here by the house.  It was easier for the other dickless dirtbags to put their tail in between their legs and run away.

She turned and entered the house.  What was done, was done.  She wasn’t going to change anything by screaming in annoyance when it was her feelings that were hurt, not her concern with dying.

Her old Merc leader, TH, had told her one time, you do what you got to do.  Most of the time, it will come out alright.  Occasionally?  Well occasionally it might come up snake-eyes and you just hope that when you close your eyes a final time, you can be proud of yourself.

That was over ten years ago.  She considered what she had built out here in the Fallen Lands and considered it good.  She’d helped over a hundred souls through the years and pulled a few out of a bad future.  Now, she had three who were willing to walk into Purgatory with her.

She stopped in the kitchen, and started the coffee water to boiling on the old pot-bellied fire stove.  It helped heat the house and warm the body.

And hopefully, the soul when all of this was done.

“Hellooo the house?” a strange voice called out.

Sarah Jennifer turned towards the door leading outside.  She pushed the coffee pot off the main heating area and walked back towards the back, grabbing a rifle on her way.

It would be stupid not to be careful.

She took a sidestep into the viewing room beside the door and looked out. In the faint light, she could see her three guys up on their horses, surrounding a tall man in a black trench coat, the light reflecting off his bald head.  He was looking around the yard and the obvious lack of activity for such large buildings, the horse stables mostly empty.

Bastards had even taken the horses she had provided them.

With her men behind him, she considered it safe enough.  She set the rifle down and walked around to the door, opening it and stepping outside.

Michael looked around, his lip twitching.  He could see the signs that there should be at least another fifteen people minimum here right now.

All this woman had was the three guys behind him and now, him.

Seems like the other side might need to bring another thousand if they wanted a shot at this.

His cold eyes turned back towards the house when he heard the slight grating of wood on wood.  He caught the motion and saw the concealed area she was using to check him out.

Him and his bald head.  How very Yul Brynner of himself.

Fortunately, the bastard nanocytes that had his hair wrong, didn’t consider his eyebrows too.  He was having enough of a problem dealing with his chrome dome up top.  If he didn’t have his eyebrows, he might decide it just wasn’t worth living any longer.

He snorted, perhaps Bethany Anne was right.  Just a little.

He could be rather vain.

He could hear her close the viewing door and move around. The main door opened up a second later and an attractive, somewhat older, woman stepped out.  Her figure cast in shadows with the lights around the yard.

She nodded to the men behind him and then, spoke to him.

“Mister, can I ask why my guys here are bringing you around? I can only trust that these miscreants informed you we expect to be attacked tomorrow?”

She raised an eyebrow, “Do you have a problem with blunt?”  His little smirk annoyed her, “Do you?”

Michael pursed his lips, “I don’t.  I doubt you can be more blunt than a couple of women I know.”  He thumbed at the guys behind him, “And, these men did inform me that there was going to be a little activity here tomorrow.”

She threw an annoyed glance over at Jeremiah.

Jeremiah put up his hands, “Hey! I told him the details.  He said he wanted to come along.”

Sarah Jennifer stepped off the porch and started her way towards Michael, “And what details would that be, Jeremiah?”

Before Jeremiah could answer, Michael answered.  “Probably forty, maybe fifty guys coming here to burn down the place, take you whether you like it or not and the expectation they will all end up dead.”

Sarah Jennifer threw a glance at the guys.  Dirk leaned forward as he sat on his horse and hissed quietly, “Way to go get her pissed off!”

Sarah Jennifer pointed to the men, “that’s going to be boot washing for all of you, bad attitude!”

“How about …” Michael interrupted, drawing her ire as he put his hands behind his back, and started circling Sarah Jennifer.  He looked her up and down.

“What are you doing?” she asked, but quickly countered his walk, keeping him ten feet away, and now focused on this stranger.

“You are favoring your left leg, be careful when you announce that.”

“How about I use my supposedly weak right leg and kick your ass with it?”

“Well, if you are just going to be angry,” Michael replied, his hands still behind his back, “I’d still suggest using your left leg, more power.”

Her eyes narrowed, “what was your suggestion going to be?”

“I understand from Jeremiah that if I cuss around you, it might be a boot washing if you can best me in a fight?”

“Or soap in your mouth, but we happen to be out soap, so maybe horse dung instead?” she told him.  The thrill of a good fight already loosening up her muscles.

“Oh, I’m not worried about horse dung ever reaching this mouth,” he told her, his right hand coming around and pointing to his face. “However, how about we agree if you can’t take me, then these guys are absolved from any punishment?”

“You are a cocky one, aren’t you.” She proclaimed.  Good, she liked them cocky.

“No, you mistake confidence for cocky,” he told her.

“What weapons?” she asked, “I see a sword and a couple of pistols if I’m not mistaken.”

Michael stopped and cocked his head, “You aren’t, but if you want weapons, feel free to go get some.”

She stopped circling as well, “I always enjoy feeding a cocky person their foot to chew on the best.”

“Well,” he reached under his jacket and pulled out the Wakizashi.  Her eyes opened a little.

That was a beautiful piece of work, and it had been taken care of very nicely.  She couldn’t spot any dirt on the scabbard, at least not in the dark.

“Jeremiah?” Michael spoke out and when he knew he had the man’s attention, he tossed the sword in its scabbard to him, “I’ll expect that back in a moment.”

“Wow, let me change that to super cocky,” Sarah Jennifer told him.

Michael turned to look at her and smirked, “oh, I’m just getting started.”  At that comment, she raised her own eyebrow in surprise.
No one pushed her buttons on purpose and got away with it.

FROM MICHAEL>>> WORDS COMPLETE BABY!  WOOHOO!  Damn, I LOVE when I get to say that.

It means I get to write the Author’s Forward, and then after the JIT team I get to hit PUBLISH.  Except, this time it isn’t a Bethany Anne book, it’s Michael’s.

Is it going to fly?  Will the fans like it?  Damn, I sure hope so.  (totally not hiding my head under the desk, biting my nails off….yet.)

So, there is this super cool author over in England (Mark E Cooper) that I’ve seen around the author areas and I was honored that he was reading my books, and sending out stuff to his own fans (he’s been in the business a lot longer than I).  He was so effusive, that he had me blushing.  (Which, let’s be honest, I can be totally ok with…I’m not so humble it doesn’t feel GOOOOOOD!)  😉

Anyhow, I’m pretty sure I’ve mentioned his books before (months ago), but thought why not return the favor?  I didn’t know he was going to promote me, so (shhh), I’m not telling HIM I’m promoting him…

His latest book in his series is out!

The war games are on, but the real battle has just begun… 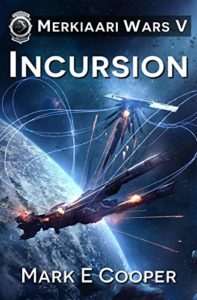 The Alliance is ready for the war games. The spectacular show of innovation and strength may change the way war is waged, but on far-flung worlds, devastating incursions have already begun. The Merkiaari are back, but news can only travel as fast as a foldspace drone.

Captain Eric Penleigh of the 501st Infantry Regiment looks forward to an easy assignment. All he needs to do is evaluate the best cutting-edge tech the Alliance has to offer and make nice with new alien allies. But when preparation for the games turns into a deadly war, nobody will be ready for what comes next…

Incursion is the long-awaited fifth book in the Merkiaari Wars series. If you like breathtaking space battles and heart-pounding military sci-fi, then you’ll love Mark E. Cooper’s latest entry in the beloved space opera saga.

This book is WIDE (not in Kindle Unlimited)

CLICK HERE TO READ MORE / BUY IT ON AMAZON