Matrix was over by the moaning Kiel, who was laying on his back next to the wall where he had collapsed just moments after placing his weapons back in the rack. “Stop licking me, Matrix!”  Kiel moaned, “this is not helping my ego one bit.”

Kael-ven was on the sitting couch the team had brought in for him to use, “I appreciate the light workout today.”

“I only wanted to think about how someone would fight something what, twice your size?” She asked him as she stretched on the floor. “So I needed to focus on determining your weak spots.”

“Rumor has it three times my size, but we do not believe it.  First, how would he be so big?  Second, the King does not show himself outside of those who meet with him. Those who are willing to share agree he is three times larger than I am.  But, could they be fabricating the truth so to support the rumor? No one knows.”

Bethany Anne’s head looked up at the Yollin, “I’ve always wondered how you know if someone taps your armor, but it doesn’t cause you pain?”

He shrugged, “I can feel the punches and occasionally if you are trying to get my attention the blunt force spread across my under muscles hurt, but nothing like a concise punch.” He lifted his left hand to play with his jaw, making sure it was still in place and working correctly from her last punch.

“Well, without seeing if I can cut you up,” she started.

Kael-ven interrupted, “Yes, I do appreciate the queen’s magnanimous decision not to use me for that particular research project.”

“Keep interrupting me, and we shall see,” she replied, “and who is teaching you magnanimous?”

Kiel’s voice groaned from the side of the room, “Blame Merideth,” he called over.

“Merideth?” Bethany Anne called out, and the EI answered.

“What are you teaching the Yollins?”

“The appropriate history that might provide insight on how a new Yollin government might be created once the present government is replaced,”  the EI replied through the speakers.

“We are studying both Monarchies and Dictatorships,” Kael-ven replied, “Magnanimous decisions for those vanquished was a point of discussion between myself and Merideth.”

This time, seemed a little different to Jesse. The light from his flashlight hit the far wall and traversed back and forth across the rocks on the cave floor. A scratch caught his attention, and he turned his flashlight back over to see a relatively large boulder. He called out to his two friends Edward and Colin to hold up a moment.

Getting close, he could tell that the scratch was recent, it wasn’t something that had been around for a long time. Further, something very hard had to have been used to create such a gash in the rock. He took his hand out of his glove and touched the rock.

He looked at the angle, slashing downwards, and wondered what it could have been. He turned and allowed his flashlight to travel back towards the opening and then turned back around 180° to consider where, if something in fact was traveling, would he find the next mark?

He started walking towards his two friends, a feeling that this time was different. Alien TV, a very small YouTube channel, might have unearthed something real. His flashlight continued traversing across the floor. Unfortunately for him at the moment, it missed a few footsteps imprinted where something heavy had to have passed.

So far, he hadn’t noticed the non-human tracks next to the human ones.

Captain Natalia Jakowski stirred her hot chocolate while she dialed up her favorite strike team.  Secretly, she was wondering what the two guys would use as an excuse for not going down to Earth this time.

Further inside the ship, Samuel was having a conversation with Richard when the captain of the ship’s voice came over the speakers, “Boys?”

Richard rolled his eyes, the Captain of the ship couldn’t be more than late thirties and that was probably giving her a few years. “Yes, Captain?”

“We have visitors in the Dulce Lake base. I need you to to go down, acquire information and confirm what is going on. I have been in communication with ADAM and understand that it looks like we might have a few civilians poking around.”

“Civilians?” Richard questioned, “I don’t remember our contract stating that we needed to help civilians?” He looked over at Samuel who had a smirk on his face.

The Captain replied, “I believe the contract, if that’s what you would like to call it, is between you and Gabrielle. I don’t think I need to be the lawyer in this little discussion. Would you like me to get Gabrielle on the line? I understand she’s going to be coming through the ship here shortly? I can certainly ask her to pause for a moment and speak with you if you require clarification, Richard.”

Richard’s eyes grew large, “Noooo Captain. Let’s keep Gabrielle happy and not bother her with trivialities shall we? She might be on a date with Eric. I don’t suppose we can get a pod out of here relatively quickly? We would like to head down earthside and perhaps get a bite to eat before we rush over to New Mexico.”

“Richard, what kind of food are you talking about? We have both human food and blood, although I was under the impression that you don’t need blood anymore?”

“Well, to be truthful,” Samuel responded, “blood is a bit of an acquired taste. It is rather similar to always having your mother’s cooking at home. You don’t like it that much when you’re always eating it … but after you go away to college for a few years, even the worst of mom’s cooking tastes delicious.”

“I would have to take your word on that, Samuel. My mother happened to be a chef for a local hotel, therefore her cooking was always delicious. For me, I got into eating too much Taco Bell at college and although it was unhealthy as hell the delicious grease was addicting. Now, I understand Gabrielle is going to be here in ten minutes with the Queen? So, did you want to get on that Pod before they arrive or are you planning on being here during lockdown when the queen arrives?”

The two vampires reached over and grabbed their backpacks and quickly made for the door, Richard yelling back over his shoulder “Captain, I don’t know why you are still talking? There’s nobody in the room at the moment. Those two individuals happen to almost be to the pod bay already,”

The Captain could hear the door slam as she reached up to turn off her microphone.

Mark Taversty looked over his shoulder from the readouts he was reviewing, “I thought the Queen wasn’t going to be here for at least an hour?” Capt. Jakowski winked at him with a smile on her face.

Captain Jakowski called to the ship’s E.I., “Sphaea? You should probably let the Pod bay know that they have two incoming vampires, and those two will probably be running.”

FROM MICHAEL>>> You know what one of the absolute COOLEST things about being an author is?

Well, except for the free dinners (which I don’t get) and the valet (another item I’ve not received) and the hordes of photographers outside my house (I have hordes of Pitchforks and Matches fans willing to send the lawn faeries my way… I’m obviously connected with the wrong set of fans! LOL)

Actually, one of the coolest experiences I’ve received is where my work, in some form or fashion, connects with readers at a level that makes them really, really engaged.  Now, it is ALWAYS something to connect with any fan, but a fan that has been reading for decades?  One that has read so much, that I couldn’t POSSIBLY hold a candle to the number of authors they remember reading, much less possibly have forgotten reading?

Well, I simply have no words to type it.  But, here is the AMAZINGLY fun part. I get to give back!

I have the opportunity to say … 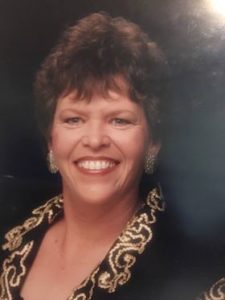 This is to our fellow fan Margaret Paulk on her 70th Birthday (if I get in trouble for the age thing, it’s Luci’s fault!)

Your daughter reached out, stepped out of her comfort zone and asked if I might be willing to WISH YOU A FANTABULOUS DAY!

(You just need to make sure I don’t stick something in a book somewhere about your birthday…You know, cause I’m working on a book and all…)

Margaret, I’m HONORED that you would even know enough about me that your daughter would think this might make you happy.

If it does, GREAT!

(Uh, if it doesn’t? Would you let The Author believe it did? You know, cause he has a fragile delicate ego thing going and all 😉 )

All our best with your birthday tomorrow, Michael Anderle