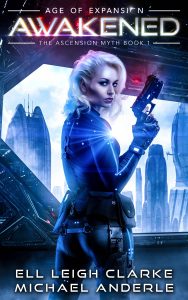 “Damn it,” Molly hissed. “The whole point of getting this close, Joel, was so that I didn’t have to try and hack through the XtraNET and deal with their port security!”

Molly was not happy. Not only was the signal not strong enough from the roof of the next building, but now Joel was trying to tell her that he couldn’t get into the server she needed.

Meatheads and technical considerations just do not mix.

She pushed the car into hover and came to rest just above the building. She hated being this exposed, but there was no other way. The underground parking lot was heavily controlled and she didn’t like their chances of getting out of there if Meathead tripped any of the security protocols.

“There has to be a server that has that label on it. It’s there somewhere.” Agitation was starting to show in her voice. She needed Joel to find this server or else it was game over.

“Well, if there is, I can’t find it.” There was a hint of irritation in his voice too. It had been a while since he had really had to perform. He was already impressive to his general clientele on his normal security and PI jobs.

Molly glanced furtively out across the city. Sure, the anti-radar paint gave them some cover from official channels, but all it would take is for someone in one of the nearby buildings to notice them out the window and report a suspicious looking vehicle, and they were screwed. This wasn’t going how they had planned it, when they had eventually gotten the ‘go’ for this project.

She scrambled to pull her kit bag into the passenger seat, and located her handheld holo. Since the capacity was all used up on her wristband, she’d had to go retro.

“Hang on…” It was Joel again, over the comm system. “There’s a secondary server room.”

Joel had made out that this was going to be a walk in the park. He figured that because his contact–their first client–worked for the company they were breaking into, it would go smoothly. He even had the guy’s security pass. But Molly was skeptical.

There was no way that Joel’s movement into the building—through the front door and straight to the server room—was going to go down as “normal” behavior. Some keycard protocol was going to pick it up, and she didn’t buy that this Mac Kerr would walk that route “all the frickin’ time”. It just didn’t stack.

Nevertheless, Joel had been able to walk in there with his gear and everything, and nothing had been flagged.

Molly heard him grunting on the line, like he was trying to shift something out of the way.

Moments later, the holo screen activated and started flashing as it located the peg and established contact.

Joel silently mouthed “thank you” to the air above him. The last thing he wanted was to have lost face on his first job with this bright young thing. Since meeting with her in the bar the other day, the idea of having a partner in crime kind of gave him a renewed sense of purpose. He just needed to not mess it up this time.

Molly had already moved on to phase two of the game plan. Anyone sitting in the car would have noticed her mood change. When she hacked, there was an intensity of purpose—like her mind had left her body and the fingers on her keyboard were being controlled by a remote force.

“There’s a problem,” she said after a few moments.

Joel had been slouching against the stack, and now he straightened up.

“Looks like someone knew we were coming. There is new code, different construction, like a shell around the original code that runs their pricing model.”

There was a silence.

“Not in the time we have. Lemme see if Oz has any better luck….”

Aggghh, shit! She hadn’t told him.

“Yeah, the AI that is plugged into my wrist holo and neural cortex.”

“What the fuck?!” Joel hissed. “AI exists? And you have one wired into you?!” He realized he was raising his voice and mentally calmed himself while clenching his teeth in frustration at Molly.

The girl really had no clue what it was to function on a team.

“Why did you think I had to leave military so fast?”

“I heard it was the result of some questionable sexcapades, resulting in a 4077 condition.”

“That was the cover to get out. I never did it with an Estarian, let alone in his…you know. Gross!”

He closed his eyes for a half-second. “But you have a fucking AI in your brain. When were you going to share this with the rest of the team?” His irritation was slowly being replaced by curiosity.

“His name is Oz, and he jumped into my holo through the Ethertrak while I was sleeping. I woke up and realized I had two choices: turn him over and potentially give the military the goddamn singularity they will use to destroy the local galaxy—thus becoming the criminal that downloaded him onto my hacked holo—or run. We chose run.”

“Well, technically, he is. He has an awareness, and a personality that he’s developing, just like any entity.”

Molly, if I may interrupt, I’m in. And from my calculations, with your level of skill and the interface you’re using it would have taken 2,453 hours to crack through that shell.

“Thank you, Oz. I appreciate your help,” Molly responded out loud, partly for Joel’s benefit.

“You’re talking to him?” He couldn’t believe what was going on as he licked his lips. And right in the middle of an intense goddamn mission.

“Yes, just thanking him for saving me two-and -a-half-thousand hours of work.” She tapped a few keys on the holo, checking they were in the clear and still undetected.

“Okay, Oz. Let’s get that patch in, and then we can pull Joel out.”

“Oz is downloading the patch that you wrote?”

“Yeah, he can respond much quicker to their security protocols. They have an adaptive algorithm that would take me hours to break. Oz is just slipping the data past it, though—like a gauntlet run.”

You’re comparing me to a warrior?

Now you sound like a big fat nerd. Molly laughed out loud.

You may not want to insult me while I’m performing such a delicate operation. If I make one wrong move and their system realizes it’s being tampered with, it will lock down the building including that secret server room Joel is in. He will be trapped, and it seems they have heavy air installed in there too.

Molly grimaced. “Joel, heads up. They have heavy air installed in case of a security breach. Have you got precautionary equipment?”

“Sure I do—in the fokking trunk,” He bitched.

FROM ELL LEIGH CLARKE >>  So for the last few weeks MA has been talking about sending the manuscript of the book off to JIT.

I’ve been thinking – JIT? Joint Institute of Technology. Why would they be interested? There’s hardly any science in it. I’d actually in my head been thinking JQI Joint Quantum Institute – totally different. Though they do have pretty badass research going down there in quantum computing and teleportation. I consider applying to do a phd there just for shits and giggles.

You know what it’s like in those boring quiet weeks when there is no Doctor Who or Sherlock to look forward to for MONTHS.

Anyway – it turns out that JIT means Just In Time. And there’s a whole team of awesome typo hawks scouring the text before it’s released from the nest to fly.

I’ve been floored at how many fixes they’ve spotted.

And how they’ve coordinated their fixes and suggestions to feedback through their conductor Steve.

I just want to say a massive thank you to all these guys and gals. ❤

And then yesterday I realised: I’ve *NEVER* had this many people involved in anything I’ve written before.

Ok. I’m back. So not only is there a whole team of amazeballs wordsmiths, designers and supporters behind this book, but then since the first snippet was shared on the website, there are all you guys who have been so supportive and encouraging.

I’ve loved chatting with you on the fb page. And boy does it make me laugh when you share stuff from the story. 4077s and the shit that Molly comes out with. You make me laugh so much! Thank you!!

And hey, if you’re reading this and we’re not already connected on fb, please do come say hi. Here’s the page:

Ok. That’s it from me for today. I’m going to go catch some Zzzzzs.

MA says he’s going to post this tomorrow morning (Wednesday), with the final snippet. And then on Thursday the whole book goes live.

I’m scared. And exhausted. And I hope I can sleep tonight.

P.S. Ok I’m putting this in the ps for two reasons:

2. The PS is the most read section of any letter. Statistically. And this last thing I want to say is really important.

And from the heart.

I want to say a special thank you to Michael Anderle.

He’s spent hours and hours showing me the ropes and turning me into a writer who publishes… from someone who had never published a single story before, didn’t think she could make anyone laugh, and never thought of herself as a writer.

And he didn’t have much to work with. I was someone who had never even read a fiction book since the age of 11. (True story. More on that later).

At 34 you inspired me to pick up Death Becomes Her, to learn the Kurtherian World and the Anderle voice, but within weeks you had me writing actual words.

Michael, you’re my Yoda. And my biggest supporter.

Thank you doesn’t begin to cover it – but that’s where I’ll start.