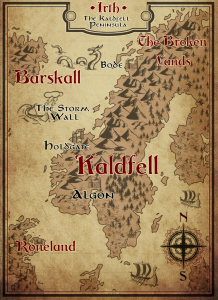 We have a new series, a new book, and a new sneak peek!

P.T. Hylton and Michael Anderle are working on a new series in The Age of Magic world, Storm Magic. We have the first snippet from book one, Storm Raiders today!

Her father’s shop was quiet that morning. She worked the bellows, stoking the fire hot enough to melt the iron he was shaping into a helmet. They performed their tasks silently, with the efficiency of a team that had been working together for many years. Abbey could tell instinctively what her father needed of her, and she did it before he even had a chance to ask.

The bell in the front of the shop chimed as the door opened. Abbey and her father exchanged an annoyed glance—being interrupted at a fire was a pet peeve for both of them, even if it was a paying customer. He took off his gloves and apron, setting them carefully on the workbench, then he sauntered to the front of the shop. Abbey stayed at the bellows so she could tend to the fire, but she had a good angle to see and hear what was going on up front. Her nose wrinkled in annoyance when she saw who it was: Lawrence and his son Olaf.

Lawrence put his hands on the counter and leaned forward, glaring at Abbey’s father. “Morning, Benjamin. I assume it’s ready?”

Benjamin grabbed a long object wrapped in oilcloth and set it down in front of Lawrence. “Indeed it is. Made to your exact specifications.”

Lawrence unrolled the cloth, his long, knobby fingers working with surprising deftness. Olaf peered excitedly over his father’s shoulder. Soon, the iron sword inside the cloth was exposed. It gleamed in the light as Lawrence picked it up and inspected it. He let out a displeased grumble.

Abbey shook her head. She’d checked the sword herself the night before, and she knew it was perfect. It was well balanced, beautifully decorated with the symbols Lawrence had requested, and sharp enough that a man could shave with it. Granted, it wasn’t quite the equal of her father’s sword, which hung behind the counter, but few swords were.

But this was the city of Holdgate. Grumbling about the product was an expected part of the negotiation process. As was what came next.

“I suppose it will do.” Lawrence’s voice dripped with reluctance as if he was granting Benjamin a favor in accepting this subpar weapon. He reached for the coin purse at his belt. “Twenty iron, then?”

Now Benjamin grimaced. He hated these games, Abbey knew, but after sixteen years in Holdgate, he’d learned to accept them as necessary to doing business here. “Lawrence, you know the agreed upon price was forty.”

“Was it?” He made a show of inspecting the weapon again. “Perhaps for a well-made blade. But this…” His voice trailed off. He clearly couldn’t think of any specific complaint.

Abbey wondered what would happen next. Often the customer would demand negotiation by combat at this stage, but a single glance at the two men on either side of the counter revealed that would not be a smart move on Lawrence’s part. Thick muscles stood out on Benjamin’s arms, and his experience with swords went far beyond making them.

Lawrence, on the other hand, looked like he’d have trouble battling a stiff wind. Like most men in Holdgate, he was a few inches taller than Benjamin, but he didn’t have the usual stocky build of most Holdgatesmen. Abbey knew Benjamin would break Lawrence in half if it came to combat.

Lawrence didn’t take his eyes off the blade when he spoke again. “The sword is a gift to Olaf for his eighteenth birthday. I’ll tell you what. He’ll fight you for the blade. If you win, we’ll pay the ridiculous fee you quoted. But if he wins, twenty is the price.”

From where Abbey stood, she could see Olaf grinning dumbly at Benjamin. Unlike his father, Olaf was sturdy Holdgate stock. He was a few inches taller than Lawrence and nearly as well-muscled as Benjamin. He’d have no shortage of offers of employment on the storm ships in the coming months, Abbey knew.

Benjamin looked the kid over. “I don’t think so.”

Lawrence cackled in surprise. “I never thought I’d see the day Benjamin of Arcadia was afraid to face a Holdgate whelp. Getting old, are you?”

Abbey gripped the bellows to keep herself from marching over there and teaching Lawrence some manners.

The hint of a smile played on Benjamin’s lips. “Perhaps I am. Young Olaf deserves a real challenge. He doesn’t want to fight an old man like me.”

Lawrence set the sword down on the oilcloth. “Excellent. We’ll be taking it for twenty iron, then.”

“Sure. But you’ll have to earn it at that price. You can have it for twenty if Olaf can defeat my daughter.”

Now it was Abbey’s turn to smile.

To find out more about P. T. Hylton and his other books visit: