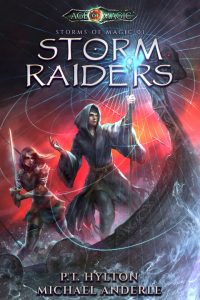 Check out this cover, folks!! It’s awesome, right? Storm Raiders is the first book in the Storms of Magic series which takes place in the Age of Magic universe.

Abbey marched to the front of the shop, a dull-edged practice sword in each hand.

Olaf scoffed when he saw them. “Practice swords? Is the girl afraid to face me in real combat?”

“The girl is not,” Abbey said.

Benjamin held up a hand. “I won’t have bloodshed in here. It’s practice swords or full price.”

Olaf looked questioningly at his father.

Lawrence shook his head, as if disgusted. “Do as they ask, son. They’re southerners. They don’t understand our ways.”

Abbey ignored the comment. Even though she’d lived in Holdgate since she was three years old, she heard similar statements all the time. Her father had come from the city of Arcadia and set up shop here after his wife’s death, a young Abbey in tow. The topic of why Benjamin would have left the wealthy city of Arcadia and chosen a life in the harsh climate of the Kaldfell peninsula was fiercely debated in town. Benjamin wasn’t forthcoming with answers, even with Abbey. All he ever told her was that it was too painful to stay in Arcadia after Abbey’s mother died. He’d needed a change.

So, Abbey had grown up here in Holdgate, an outsider from the time she was three. She’d spent most of her life in this blacksmith shop, playing with swords like other kids might play with blocks. Her father had schooled her himself, drilling her on reading and mathematics as they worked the iron together. Holdgate’s educational system seemed to be focused on throwing axes and navigating by the stars, and Benjamin said he wanted a daughter who could read.

Now, she was nineteen. Many of the girls her age were married, but Abbey still worked in her father’s shop. She still loved making weapons as much as she had when she was a child. Perhaps she’d open her own shop someday. Until then, she was content to be near the weapons she loved.

Abbey held out both swords to Olaf, offering him his pick. He looked at them for a few moments like they were a particularly challenging riddle before finally grabbing one.

Though she hadn’t spent a lot of time with other children, she’d seen Olaf around enough to know he was a bully. He was big, even by Holdgate standards. While his beard still had a wispy, boyish look, the rest of him was fully developed. His arms were as big around as Abbey’s legs.

Abbey stood six inches shorter. Her slight frame hid her lean but strong muscles. Her black hair was pulled back with a ribbon as it always was when she worked in the shop.

She took ten paces back and turned to face Olaf. She raised her sword and held it at the ready.

“You’ll fight until we signal it’s over,” Benjamin said.

Olaf held up his sword and smiled at her. “I’m going to enjoy tussling with you. Maybe we can do a bit more of it later. When our fathers aren’t around. You’d like that, wouldn’t you?”

Abbey wanted to laugh at the way he held his sword. He gripped it tightly in his ham-like fist as if it were a snake trying to wiggle free. There was no finesse in his stance, either. Clearly, he was used to winning battles with sheer strength. “Somehow, I think I’m going to be the only one who enjoys this. Call the start, Father?”

Benjamin crossed his arms and leaned back against the wall behind him. He wore the easy expression of a man preparing to watch something amusing. “Begin.”

He held his sword two-handed, raised over his head. It might as well have been a club.

Abbey’s instinct was to rush to meet him, but she remembered her father’s most frequent instruction: Patience. It was something he reminded her of nearly every day in her sword practice.

She’d been sparring against her father for more than a decade, so she was no stranger to facing bigger and stronger opponents. She’d learned to use her smaller size as an advantage. Your opponents will underestimate you, her father had often reminded her. Don’t let them see what you can really do until it’s too late for them to stop you.

So, she waited with sword raised as Olaf charged. Then, when he was almost to her, she made her move. She thrust her practice sword forward, driving it into Olaf’s stomach. The air rushed out of him in an audible oof. She then spun out of the way as his momentum sent him careening past. The young man stumbled to a stop, dangerously close to the kiln and put his hands on his knees as he tried to regain his breath.

Abbey could have gone after him and finished it then and there, but she was having too much fun. “Are you enjoying tussling with me?” she asked sweetly.

Lawrence threw his hands up in the air. “What’s wrong with you, boy? Get after her!”

Olaf slowly rose to a standing position. There was fury in his eyes now. “Gladly, Father.” He moved toward Abbey again, more slowly this time, his sword held in front of him.

Abbey jabbed her sword forward, testing his defenses, but he batted it away. It looked like he was done underestimating her. He fired back with a surprisingly quick thrust. Abbey parried, but the deflected sword still managed to whack her upper arm.

Shit! If these had been real swords, she’d have blood pouring out of her arm right now. As it was, she’d have a nice bruise on that arm tomorrow.

Enough messing around. It was time to end this.

Abbey swung her sword in a wildly obvious attack. When Olaf took the bait and raised his sword to block, she pulled back, and thrust her sword under his defenses, again jabbing him in the stomach. He managed to keep his feet, but she had him off balance. All she had to do was keep attacking.

The time for finesse was over. She let loose a barrage of blows, hitting him in the arms, the chest, the stomach. He managed to block some of them, but he was desperately off balance, so she easily knocked his blade aside again and again.

Abbey immediately stopped her assault. She held out a hand to Olaf. “You all right?”

He looked at her hand like it was covered in shit. “Like I’d shake hands with a piece of Arcadian filth.” He threw down his practice sword and stormed out of the shop.

After Lawrence had paid and left with his sword, Abbey allowed herself to rub the spot on her arm where Olaf had stuck her. “That went well.”

Benjamin stroked his short beard. “Not bad. Your defense was a bit sloppy. If you’d been fighting a skilled swordsman, you might have been in trouble.”

Abbey picked up the other practice sword off the floor. “Perhaps you’d care to test me?”

Benjamin laughed. “After what I just saw you do to Olaf? No thanks. The boy is going to be sore for a month.” He picked up his apron off the workbench and put it on. “We’ve got a lot of work to do before the festival tonight. Let’s get to it.”

If you like this then check out other books by PT Hylton and catch up on news at http://www.pthylton.com

The Darkest Night – Snippet 09 of …
Snippet 3 from Nomad Avenged!