When those three arrived, Sheldon felt a bit intimidated.  At first, it wasn’t a big deal as they had just ‘arrived’ and knocked on the door.  It wasn’t until Darryl checked out the cars and confirmed they were clear that it became apparent just how they had arrived.

Darryl had Sheldon open the door into the darkness.  When it was fully opened, a black…something… came down from above and then glided into their area.  Tim was quick enough to start the door closing as William had opened the pod and started pulling white boxes about a foot square and six inches in height.  There were a total of eighteen of those, and then three larger boxes.  Sheldon found out that six were installed underneath the car and then one large device in the trunk.

It took William twenty-three minutes a car.  When he finished with one, then Marcus would start talking to himself and typing furiously on a laptop he had with him.  They had pulled up a rolling table to place the laptop on top of so he could type and then take a few measurements and then type some more.

“Sheldon?” Marcus had called over to him.

Sheldon was watching William working on one of the cars high on a lift and had to jog back over to where Marcus was working, “Yes?”

“Can I get something destructive?”  Marcus asked.

Sheldon was confused and slightly alarmed, “Desctructive? Not to be too concerned, but these are really, really expensive cars, and I’d prefer they didn’t get hurt while they are still in our garage.”

Sheldon’s eyes opened a little wide, “Still not liking where this is going…”

Marcus dipped his head down to look over his glasses, “Young man, these cars will not be scratched.”  Sheldon looked at Marcus for a moment before turning to search for a long metal bar.  “I expect,” Marcus finished.

A minute later, Sheldon came over with a long metal bar used for full-size car jacks.  Marcus touched a couple of buttons on the laptop and then typed in a sentence and waited for a reply before holding his hand out to grab the bar.  It dropped some when Marcus caught it since he wasn’t expecting it to be so heavy.

“This will do nicely,” Marcus said.  “Here goes nothing!” To Sheldon’s immediate horror, the man grabbed the bar in both hands and swung it over his head to land on the hood of the first beautiful F12.

“What the HELL!”  Sheldon asked as he jumped to pull the metal rod out of Marcus’s hand who let it go and stepped over the hood.  He rubbed the location where the bar had slammed down.

Marcus looked up to the suprised salesperson, “See, nothing!”  He waved a hand for Sheldon to come and take a look.  Sheldon rubbed over the location he knew he had seen the rod hit, but it was spotless, and more importantly, dentless.

He continued rubbing the spot while turning his head to look up at Marcus, “How?”

The man smiled back, “It’s a feature of the engines we installed.  We aren’t changing the glass like we would on her SUV’s, so we are making damn sure it has a protective field enveloping her.  Mind you; I’d prefer you didn’t tell anyone.”  Marcus admitted after a moment.

“I’m not,” Sheldon agreed, “This whole piece except the pictures and whatever she decides to video for me won’t be talked about by me.”

“Good…good.”  Marcus said, “now for the second part.”  He turned back to the rolling table and stepped back a few more feet pulling the table with him, “Ah, you might want to come over here with me.”

He typed on the laptop another time and then Sheldon watched as the F12berlinetta lifted off of the ground six inches, “What the hell,” Sheldon murmured.  He stepped closer to the car and went down on his knees to confirm all four wheels were off the ground.

“See any problems?”  Marcus asked, concern in his voice.

“Problems?” Sheldon asked, looking back up at the scientist, “If by problems you mean a wheel is touching the ground, then no.  They all seem to be at the same height.  The problem,” he contined as he turned back around to look under the car, “Is that we shouldn’t be watching a Ferrari floating.”

“You get used to it,” Marcus admitted.

“No,”  Sheldon whispered, “I’m pretty sure I’m always going to find this cool-as-shit.”

Sheldon waited at the front door at fifteen minutes past seven when a darkend SUV turned into the dealer parking lot.  The morning sun was reflecting off the white dealership walls highlighting the palm tree’s that were around the building.

There, in front of the SUV were three F12berlinetta’s all in the beautiful dark red Rosso Fiorano color Bethany Anne had requested.  The three were slightly ahead of each other like they had been staged for a calandar picture.

Which, interestingly enough, they had been.

Sheldon nodded to Mark Koeff, who had been setting up his camera and lights for the last few hours.  When Mark arrived, Sheldon gave him the news just who he was photographing, and even Mark was impressed.

That was saying something for a man who had photographed luminaries such as actor / governor Schwarzeneggar to Astronaut Buzz Aldrin and met others such as Christie Brinkley, Raquel Welch, Ringo Starr and Michael Caine in his many requests to come and shoot exlcusive events in LA.

Mark turned out to have a story for just about everything but was kind and soft spoken.  If there was ever a more down to earth person who had survived working in the glitz and glamor of LA and Orange County in California, Sheldon was hard pressed to figure out who it could be.

When Mark admitted he had done a project for a friend for an Orange County MINI Cooper dealership with their cars, Sheldon thought it was perfect!

So, Mark setup the cars and explained how he wanted to setup the shots with Bethany Anne leaning on the first car, and her security on their own.

The front doors of the SUV opened, and John, then Eric stepped out and nodded to everyone.  “Morning guys.” John grunted.

Sheldon had his team of three guys off to the side and TQB’s three people Marcus, William and Darryl were standing with them.

Darryl broke from the ranks and walked over, “They are clean, and they are ready.  Although, I have to call bullshit on you two getting this ride first!” He grinned.

“Kiss my,” Eric started before changing his sentence, “tell me you didn’t make sure it went up and down correctly as a ‘security’ measure.”  He challenged Darryl, who shrugged but didn’t answer the question directly.

“That’s what I thought,” Eric continued, “Besides, you get to take the SUV back to the house.”

“Woohoo!”  Darryl squeeled as he twirled his finger around in a circle up in the air. “Be still my bleeding heart.  SUV or Ferrari with flight capabilities.  Gee, I wonder which one I would pick?”

“The one you’re told to.”  John interrupted the two, “Let’s make sure we get out of here correctly guys.  Enough horseplay.”

Eric mouthed ‘sorry’ to Darryl for getting them off track.  The two of them broke up, and Darryl went to step to the back of the three cars.

Michael >> I’m in a small Facebook group with a few authors and one of their books I’ve read recently is Jason Cipriano’s CURSED  from his Thrice Cursed Mage series.  Jason’s author story is completely different from mine in that he has a BUNCH of books out (including writing in the JET world…which is pretty damned cool to me).  BUT, CURSED is his major break-away hit.  He has now followed this book up with the FOURTH in series “SEIZED” out a week ago.  This makes four books in the series out in something like five months.  That’s awesome to a fast reader such as myself. 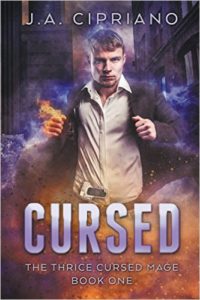 My name is Mac Brennan and that’s the only thing I can remember about myself. Not why I woke up in a dumpster. Not why my right arm is as black as pitch and covered in glowing red tattoos, and certainly not why a vicious death cult is after me.

Actually, that last part isn’t true. I know why the death cult is after me. It’s because I saved that damned girl from them. I didn’t know who she was at the time, but I’d have done it anyway. I just don’t like it when girls get beat up, call me old fashioned.

Still, I can tell she’s hiding something behind those devilish eyes, and if I want to find out what it is, I’ll have to help her.

My name is Mac Brennan. I have no memory, and I’m a werewolf-hunting, hellfire-flinging version of Faust himself.

CHECK CURSED OUT ON AMAZON