The door behind the driver in the SUV opened up, and Bethany Anne stepped out.  She had on large dark sunglasses and ruby-red lipstick.  With a short and tight leather jacket and red pants and mid-height white topped leather  red-soled shoes.

She could hear the photographer snapping images.  That was all right, right now Sheldon had held up his end of the bargain, and this was the first of her plan to give the finger to everyone who wanted her technology.  She stepped over to Sheldon and held out her hand. “Thank you, this is exactly the type of service I was hoping to receive.  You’ve done your profession well.”  She turned to smile at the photographer, “Mr. Keoff, how are you?”

Mark looked up from his camera in surprise, “Fine?”  He answered before smiling, “Ok, I’m a little sleepy from the red-eye and this atrocious timezone, but other than that?”  He shrugged, “Fantastic!”

Bethany Anne walked over to shake his hand, “I’m excited that Sheldon was able to procure your expertise.  I’ve reviewed a lot of your work under your Mark Jordan name and approve.  Excellent work, beautiful eye.”  She looked back at the three beautiful cars, “Where do you want me?”

“Ahhhhh,”  Mark studied the beauty in front of him and the cars.  He turned to the largest of her guards, “Is there any way I can get some sunlight in here?  The flourescents are going to wash out her skin color.”  The big guy snorted, and she pointed a finger at him, but it didn’t cause him to hide his grin.

“Sure,” John answered Mark, “Let’s get the paper work done real quick and that way if anything happens we can leave quickly.”

Mark spent the next ten minutes taking a lot of photo’s of Bethany Anne as she signed the paperwork and then with all of the guys who had worked to prep her cars through the night.  When they each had their time, the men were respectful.

Bethany Anne walked over to Marcus and leaned into him, “Smart phone cameras?”

Marcus grunted with a smile and said, “Not a chance.”

She nodded her appreciation and turned back to the team, “Hey, is there anyone who would like to make a thousand bucks this morning?”  Two of the guys who had worked on the cars threw their hands up in the air. “Great!  We have an SUV outside and need it to be driven back to our home in Key Biscayne.”  This cause Darryl, William, and Marcus to turn to her, “We have six bodies, and six seats guys.  You think I wouldn’t take you all with us?”

Darryl looked over to John, “You ass!”  John just chuckled and turned around to face the opposite way.

Then, it was time for Mark to get busy with his camera and it was magic.  The light streaming off of her light skin against the beautiful blood red color of the Ferrari’s was going to get him engagements from around the world if he was willing to travel from Southern California again.

>>I’m picking up chatter that there is an APB request to stop you in the SUV.<<

>>Request to find out your whereabouts during the disappearance of Sean Truitt.<<

What do they think?

>>I have no data of any real evidence, it is just a request to apprehend.<<

Well…shit.  I’d be more annoyed, but I did kill him.  Bethany Anne mused as she winked at the camera.

Hell no, TOM.  When have you known me to bother with the death of the deserving?

I haven’t, but they usually don’t require APB’s on you.

Politics, probably.  Oh well, Let’s get this done. Where are they?

Well, that would have worked ok about an hour ago.  Tell you what, let’s do this and have some fun.

“Mark?” She interrupted the picture he was taking.

“Yes?” He asked, not putting down his camera as he worked.

“You want some pictures that will rock the world?”  She asked.

“You mean more pictures?  Because I’m pretty sure I have some already.”  His voice came from behind his camera.

“I mean pictures never before occurring outside of Photoshop.”  She told him.

This time, Mark put down his camera and looked back at her as he considered what he knew, “Where do I need to setup?”

“Back seat of the SUV as it goes back to our home in Key Biscayne.  You will have to be quick, but if you do it right, these shots will be in the papers in the morning.”

She turned to Sheldon, “Ready for your video?”  He nodded and after she gave him an enthusiastic recommendation she stepped back to her car and grabbed the keys.  Her guys were already in their cars, with their driver windows down as she slipped into hers.

How long has the SUV been gone?

You aren’t stopping, are you?

No, but I want them to point to our cars before we pass them by.

Bethany Anne, there are only two lanes on the road, what if they block the causeway?

That’s what I’m counting on, John.

Where are we going?

Back to Colorado, I guess.  I need to store these in something to take them to Australia.  Too hard to place them on the Ad Aeternitatem and I’m not having them suffer the wind buffering all the way to the other side.

You good with this?

I’m going to have to deal with these feelings sometime.

I got your back, Bethany Anne.

And I got yours, Mr. Grimes.

Thirty minutes later, two police vehicles pulled out on the causeway to stop a window tinted, black SUV with license plates.   The vehicle used to spot them had followed them on the bridge and blocked the SUV from leaving.

Four officers quickly stepped out of their cars and stepped over to pull the doors open and asked everyone to step out.  Including the photographer who had his camera around his neck.  The police officers were in the middle of questioning the three men when the roar of supercars could be heard coming their way.  Two of the men pointed to the three identical F12berlinettas screaming towards them when a hundred and fifty feet away they all took to the air and turned as if on invisible roller coaster rails and headed back towards land…across the water.

Well, one thing was right.  Mark’s pictures were seen all over the world the next morning.  By the time Bethany Anne and her team needed to land, her legal counsel Jakob Yadav had the APB already rescinded, and more than one counter-suite fired off in her defense.

Not that it mattered, while the three Ferrari’s might be in residence at TBQ headquarters in Colorado, the six people had already left.

From Michael >> Michael-Scott Earle, how do I out the ways you are different?  Well, let’s not count and leave it alone.  Michael-Scott is a fun and interesting author hailing from California kind of near where my older brother lives.  He and I are going back and forth on whether ‘free’ in first series is a better marketing method, or go ahead and charge and push hard with adding new books.  So far, I’m ahead but I think that is more dependent on the fact I have a more popular series, and Michael-Scott’s plan (and book size) is different.  He definitely writes more than I!

Be aware, more sex scenes in this series than mine, or so I’m told ;-). 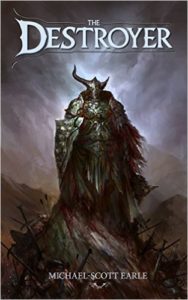 After untold centuries of absence, the evil Ancients have returned. Their magic appears unstoppable and their hunger for conquest is insatiable. To protect the country of Nia, Duchess Nadea and Scholar Paug make a desperate journey to find a human legend: A man known to have destroyed these Ancient foes with a powerful army.

But legends can lie.

When Paug and Nadea revive their hero from sleep, his virtue is far from clear.

Is he really their Savior or their Destroyer?