Nikhil Patel stood to the side, watching as the paramedics took the body of one of his researchers out on a stretcher, a white cloth draped over her body.

He had seen her beautiful but dead eyes staring out in anguish on the floor of her lab early this morning.  He had rushed to the offices when he got word that the alarms had been tripped.

By Anjali herself, apparently.

Nikhil tried to hold back the tears. Anjali was the devoted wife of a close friend of his.  Nikhil had been amazed that Talan had been able to even hold the interest of a woman of her intellect and beauty. Nikhil had asked her about that one time when the three of them were out for drinks. She told him that Talan could make her laugh no matter how bad her day had been.

Now, Nikhil doubted he would be able to stop Talan’s tears, ever.

The police were inside the building, and Nikhil was outside trying to understand the purpose of this attack when he noticed someone pointing up into the sky.

He turned to look up, shading his eyes from the morning sun when he saw small black dots coming down towards them.  In a few seconds, he could discern that they were slowing down.

And still coming down right at them.

A few people standing in the parking lot started moving quickly towards the building as they stopped their descent about a hundred feet up and then slowly started to descend onto the parking lot where those people had been standing.

Nikhil’s eyes opened wider when he finally recognized these shapes.  These were the famous Pods, the gravitic transportation of Bethany Anne, the CEO of his companies parent company.

The top boss had arrived.

Nikhil unconsciously straightened his jacket as he walked towards the Pods.  The first door opened, and a Raven haired beauty and a large white dog got out.  She was dressed in black leathers with a jacket that barely concealed her pistols.

She stepped out of the Pod and looked around before all of the Pods but one opened and Nikhil watched as many men and another woman stepped out.

Finally, the last Pod opened, and Nikhil gawked at the biggest man he had ever been near stepped out all in black  with many weapons on his body.  None of them were concealed.  He looked around before offering a hand to the woman inside, and she pulled on his arm to step out.

He noticed that her people spread out looking for threats and then he found himself inside a circle that included himself and his CEO, who was walking straight at him.

She was wearing a modified suit.  The pants were leather, her top some sort of black spandex and he noticed she had pistols on, as well.  Covering it up was a nicely tailored dark red jacket.

She held her hand out to him, “Mr. Patel, I’m Bethany Anne.” Nikhil shook her hand, and she turned towards the ambulance, “Is Ms. Anjali inside or in the ambulance?”

“The ambulance, but I’m afraid she was killed.” He told her.

“I know, but I’m going to pay my respects.” She replied.  He walked with her as she strode towards the ambulance.

One of the paramedics was about to close the door when he noticed the large group of people coming right at him.  He looked around to see if there was another destination before a big black man approached and he stepped back.

The big black guard opened the door for Bethany Anne to step into the ambulance.  Nikhil was allowed to step inside with her before her guards blocked anyone from getting closer.

He watched as she reached down to hold the bodies hand through the sheet and pulled the top of the sheet down just enough to see Anjali’s face.  He noticed a tear made its way down her face.

Not thinking, Nikhil said into the silence in a near whisper, “She was pregnant, she was going to tell her husband Talan the good news tomorrow when both his and her parents arrived.” He sniffed once and wiped a tear from his own eye, “She loved to read the old stories from other countries, from centuries in our past.  If the baby was a boy, she wanted to name him Alexander.”  Bethany Anne turned to face him as he finished, “If it was a girl, she would name her Alexandra.”

Nikhil noticed something he would swear was true for the rest of his life.

She turned back towards Anjali’s body and put her left hand on her forehead, “I swear to you, the sea will run red before I fail to avenge you and your unborn child’s death. Anjali, you have the Queen Bitch’s promise.”

When she looked at Nikhil again, her eyes were normal. “Whatever her salary was Mr. Patel, triple it and create a fund to help children learn to read the classics or whatever they want to read.  Name it the Princess Alexandra fund in her unborn daughter’s honor.  Then, create another fund and make it ten times her salary and provide monthly payments to her husband.”

She stood up, and Nikhil asked, “Excuse me, but where do you want me to pull the funds to make this happen?”

She turned towards him, vengeance clearly written in her eyes, “For now, from this company.  But, I will reimburse it from the accounts of those who stole her life.  One way or another. They will pay it all.”  With that, she turned away and stepped back out of the ambulance.

“She was pregnant, John.” Bethany Anne spoke into the silence inside the Pod. “They fucking killed an unborn child.”

Inside the Pod, where no one in the world could see her unmasked, John Grimes popped the locks on his harness and turned to open his arms as Bethany Anne laid her head against his chest, “A child, John.  She never got to tell her own husband.  For what?”

He felt her shoulders shake as she cried in muted silence, the two of them flying towards destiny.

Ten minutes later, the team was gone. It wasn’t until after they left that he wondered how she was so sure it was a daughter.  Two weeks later, he was comforting Talan when Talan happened to mention he was told his wife had been carrying a little girl.

>> From Michael – This doesn’t need much setup (as I go into it in the book itself), but here is what I WILL say.  Boris is back! Check out the new collaboration between Paul C. Middleton and myself, rocking another short series in the Kurtherian Gambit Universe…A book that reached #1 for Action and Adventure (at least for a little while) and beat Out George R.R. Martin’s shorts ;-). 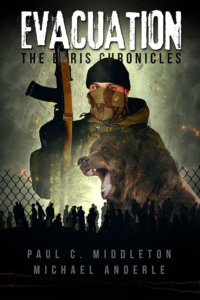 The Russian Mercenary known as Boris has always been a conundrum for governments the world over. His visage never changes, his capabilities never understood.
The Russian government gets word he has been killed on a mercenary mission in America, allowing agents to come in and attack the villages Boris has been protecting. Using a fanatical military sub-group in the Russian military, the atrocities start.

The only problem? Boris isn’t dead, and now he has help.

Boris won’t allow his people to go unprotected, and now the Queen Bitch herself has accepted his oath of fealty.

Russia doesn’t have a clue what they have started when this Bear comes back from the Dead.

Get a little more Kurtherian Gambit Universe in your life today by clicking right here!