It was half an hour past midnight when the President and two of his secret service members walked the distance from the residential wing to the Deep Underground Command Center located adjacent to the West Wing.  As they arrived next to a meeting room, two members of his security staff stepped out.

“David, is the other side secured?” He asked the ranking Secret Service agent who just came through the door.

“Yes, I’ve locked the door from the inside and confirmed with both security members on the other door they will be there for the next six hours. There are no personnel authorized to come down from the other entrance.”

“I only need an hour, probably less,” The President told him.

The President pursed his lips, then smiled. “I’ll tell you what, I’ll bet you a dinner I’ll have a meeting.”

David regarded the President for a moment.  “Ok, but I want the nicest, best-aged Filet Mignon and a baked potato soaked in butter.”  David looked around to make sure the three other Secret Service Agents were listening.

“Agreed,” the President said as he stepped to the door and turned before closing it to look at his men. “Remember, no one enters this door, either, gentlemen.”  With that, the President closed the door.  Three seconds later, the door opened, and a hand stuck out.  Secret Service Agent Mark Tims smiled and put the most recent sports section from the newspaper into the waiting hand.  Both the hand and the sports section disappeared and the door shut with a click.

David looked over to Mark, “I give him ten minutes, fifteen on the outside before he admits I’m right.”

Mark looked back then turned to face towards the rest of the room and got into position, “Do you have any idea who he expects to meet?”

“Nope,” David admitted, “Not that it matters.  There isn’t any way that someone is going to turn invisible, sneak through the entrance on the other side with our temperature, and movement detectors and bust the lock to get inside that meeting room.  Hell will freeze over, first.”

Mark shrugged, “You are probably right.  Unless he was meeting the CEO of TQB Enterprises, they probably have some scary techni-shit.”

David snorted, “Like she would want to show up here in the States.”

The President sat down in the same chair he had the last time he met this person. That time, like this evening, was off the books, off the record and frankly never happened.

He opened the sports to the second page to see what the latest scores were.  He made it to page three when he sensed, rather than heard, someone in the large meeting room with him.  He looked up to see her eyeing him, a small smile on her face. She was wearing a pair of dark jeans, a red camisole and a black jacket over it.  She didn’t have on any jewelry, but then, she didn’t need any.

The President smiled, “Well, looks like I won the bet.”

“Oh? What bet would that be,” she asked him as she walked over and pulled out the chair on his left to sit facing him.

“Whether I would have a meeting in here or not.” He told her, “Although I’m going to have to play like I lost the bet.  At some point, I should throw a fit over how you keep standing me up.” He grinned, “But since these meetings aren’t on the record, how would that work?”  The President closed the sports section before asking, “Just curious, how did you get in here?”

Bethany Anne raised an eyebrow, “While it isn’t, say at the level of a national secret, I do have a few important ones.”  She grinned, “Maybe someday I’ll take you on a walk that will change your life.”

The President laughed and shook his head, “I’m not sure my wife would like me to take any walk that could change my life.  She has told me at least three times every week since I gained office if I decide to run again, she will castrate me, or I’ll be sleeping on the couch for the duration of my time in office.”  He sobered, “But if there is a way to get into this area that others can use, I’d be incredibly appreciative if you explained it.”

Bethany Anne shook her head, “There is no way for another person, living; that can enter here using the means I have.  Should that change, I will get ahold of you and provide a warning device of some sort to help.”

He shrugged, “Best I’m going to get?” She nodded her answer. “Ok. How about the next item on the agenda.  What is this about a real Illuminati?”

Bethany Anne leaned a little forward, “There is an offshoot of the original Illuminati group, a splinter if you will, which was responsible for the attack on our facilities in Colorado and the backpack nuke. They are responsible for many different efforts on our group trying both legal and illegal means to acquire our technology.”

“You know that’s true for damn near any major company in the world and most of the countries, right?” He asked her, wondering how she would answer.

“I’m totally aware of the desires, Mr. President.”  Bethany Anne considered how much to share before continuing, “I’m aware of most attacks and plans, most secondary plans and their followups.  I’m not trying to upset the world, that is the reason for not using our technology to upset the World’s economies in the first place.  However, I’ll not simply stand by and allow attacks to happen. That is not in my nature.”

“A lot of think-tank scientists are trying to figure out what your nature is, exactly.”

He paused a moment, “Well, are you human?”

FROM MIKE >>  So, I can hear the gnashing of teeth already… DAMN YOU ANDERLE!  They say (in my head…it’s these voices, almost like I can hear some of the fans on Amazon and Facebook waiting for the resolution)…the resolution of those who caused the last snippet to occur …But that happens LATER in the book.  So, unfortunately I put snippets up in the order of the book, and this book shows it a little out of order (blame the Pepsi)… and the lake of sleep in Vegas due to the beds.  I think.

Either way, it’s coming.  I joked one time that book 7 should have been named Die…die…die…die…die….and Kneel (instead of Kneel or Die).  So far, it doesn’t really look like there is going to be much in the way of kneeling.  But, I’m only 1/2 way finished and our death count is only 4 for the enemy right now.  I believe it is going to go downhill.

So, let’s talk Craig Martelle – An Former-Marine (20+ years), ex-lawyer (business, not criminal…so, no need to hate on him!) big friend of the authors group has a couple of series out.  The dude can be righteously funny (a piece of another book I’ve read had me shaking my head…it had to do with dangling participles in Alaska).  He gives back to our Indie Author community and is generally just a nice guy.  I’m happy to highlight his series that has four books out, with number 5 coming soon so check out this book from Craig and see if you might like it 😉 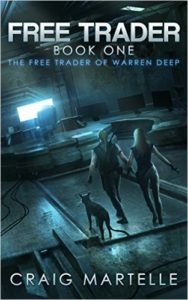 A Hillcat and his human minions fight to save humanity. Hostile humans and mutant creatures try to keep them from rebuilding society.

Following a civil war on the earth colonized world of Cygnus VII, humanity and its creations rise again. Free Trader Braden and his mindlinked Hillcat determine that their fortune lies to the south, away from what passes for civilization. Braden gathers engineered (mutant) creatures to him for a trip south of the Great Desert where he hopes to find Old Tech that he can trade for untold riches.

The more he learns about the ancients, the more he wants to learn. Along the way, he establishes a new ideal regarding trade and collaboration in an area where trust of strangers is unknown. Braden and his companions find functioning Old Tech that has the potential to change their world for the better or worse, depending on what they decide.