Bethany Anne started chuckling, “I was born on this planet with two human parents, if that doesn’t make me human, I’m not sure what would clarify it further.”

She put up a finger, “Mr. President, I do this as a favor, not as an opportunity to play twenty questions.”

“You can forgive me for trying?  I do have the responsibility for four hundred million people to look after,”

Bethany Anne’s face sobered, “Mr. President, I’m concerned with the seven and a half billion we have on earth, and those coming after us. My parent’s names aren’t going to accomplish much except provide some annoying researcher further useless information to try and analyze me.  If you want my thoughts on something, you can ask.” She pulled a USB memory chip out of her jacket.  The President didn’t fail to notice the small pistol and holster she was wearing.

He wasn’t accustomed to having anyone but Secret Service Agents around him with weapons. If any of the guys on the other side of the door knew he was talking with an armed lady just a few feet away, they would be trying to bust down the door to protect him.  He smiled.

“This is …” she started before her eyes drew together in confusion, “why are you smiling?”

“I’m just thinking how my protective detail,” he jerked a thumb over his shoulder, “would react if they knew I had an armed person sitting in here with me.  It humored me to imagine them trying to bust down the door in frustration.”  He smiled at her and chuckled, “Sometimes, it is the little things I think about that bring a smile to my face.”  He pointed to his hair on the side of his head, “I wasn’t expecting to go gray quite so fast.”

Bethany Anne put the USB on the table, “Talk to me when you get out of office if I’m still around, and I’ll help you with that.”  She slid the USB over to him, “On here are the names of the members in the United States and all of your territories.  There are thousands in total, although there are probably no more than a hundred and twenty-five that I would rate as the highest priority to review. Those are tagged.”

>>A hundred and twenty-seven.>>

I know that, ADAM.  What have we talked about when being exact with humans?

>>That to always be exact points to you not being human.<<

If an A.I. could sound miffed mentally, ADAM was accomplishing the feat pretty well, she thought. Yes, so while you are an Entity, and you are working to accomplish the most amazing feats ever for me, I need you to understand that if you grease the wheels, it will help reduce trouble.  Make sure you update the EVE project for me with that understanding.  She thought quickly, except in battle, you don’t fudge anything during battles.

>>I understand and will make the adjustments.<<

The President eyed the USB, “I’m not going to like what is on that, am I?”  He reached to take the USB, “Pandora’s box?”

“Some, not all of it.  Some of the people on that USB are just family, people who can be used to blackmail other people to get them to do what the Black Cabal need them to do.” When he raised his eyes to her, she explained further, “My name for them.”

He nodded his understanding, “What should I do about General George Thourbourah?”

“Well, his boss is out of the equation and don’t ask about that if you want plausible deniability.  He believes I was seriously hurt, but that will go by the wayside the next time I’m photographed.”

“Oh, earlier than that,” he assured her.  He shrugged at her raised eyebrow, “We have assets that track all important people.  That could mean important for any number of reasons; you just happen to trip a few of them including financial, technological and security.”

Find out how many countries are tracking me, and start placing information that shows me everywhere so that they can never tell what is the right answer.

Can you make it happen retroactively so that the information seemed like it happened before this conversation?”

>>Not easily, no.  Countries will have a paper trail.<<

Damn.  Ok, figure out the countries data feed and start adding additional false positives if you can.  I suppose changing their data would flag them you are in the system.

>>Not to mention might be too risky unless you believe this must occur?<<

No, it isn’t that big of a deal.  I just didn’t realize I’m on various country’s morning reports, and it bugs the shit out of me.

What are you working on at the moment?

Still on the gravitic issues with Marcus.

Please add a request to your queue to consider what it would take to change someone to look like me.

I can answer that question already.  The Pod doc can’t do it.  It works on the person’s DNA, so it isn’t going to change another person to look like you.

But I thought since you can change the structure of the materials in a body, this might be possible?

That was changing the design, not how you look.  The Pod Doc hasn’t been setup to change a person.

Wait a minute, TOM – you paused! I sense you thinking about something, fess up.

Well, if a patient is considerably messed up physically or their DNA has been corrupted, the Pod Doc can use a super-set of DNA to try and fix, which would certainly change the person as they heal.

Yes, but not very recommended.

Ok, I’ll push that idea off to the side.

Yes, sorry.  I don’t like being the target, and I figured if there were copies, it would be hard to confirm which version is me.

It would be the version with four huge guards walking around her, he quipped.

Did you just zing me… again?  She replied.

Yes and here’s your sign. he told her in a southern drawl.

You ass!  She heard his version of a chuckle and then withdraw from their conversation.

That’s another one I owe you, she thought

FROM MICHAEL >> So, 15 chapters out in editing and I’m off to write some more this evening!  I thought the comments on the FB group about drinking the big Cokes which included: From Bjorn -“Just give in to your desires. You know you want the Mexican bottle. In can feel it running thought your veins. Drink it and together we can rule the Galaxy!” and from Holly -“Whatever it takes, whatever it takes. Your fans demand it of you…. :)” were hilarious.  It doesn’t matter if I have to wear an XXL t-shirt with “Body by Coke” on it just so long as the next book comes out more quickly.

Trust me, I don’t need additional temptation to drink more Coke! (For those that missed it, I admitted to buying the little 8 oz Cokes as a way to help me limit my Coke consumption.)

This Snippets book suggestion comes from a huge F.O.T.S.  (Fan of the Series) Lisa Lamb Diggs.  Here are her comments!

From Lisa >> I found a new author that may need your assistance. I read his books and I really liked them even though they are a little darker than I like. His name is L. J. Kendall – book “Wild Thing: The Leeth Dossier Vol 1” fans of yours may like the story but I will caution that the story has aspects that I really dislike but is in line with the story being told. As an indie author and self published it kept me engrossed and very few errors that I could see. He has challenged his readers to assist him with corrections and to help out with getting other readers to his books. I know you are trying to help other authors like him so I wanted to bring him to your attention.

(For a limited time only, at the bargain price of $0.99 for the Kindle edition.) 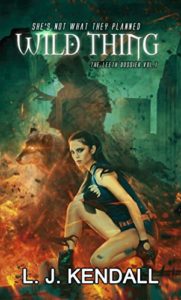 IN 2036, magic returned to a world which neither needed nor wanted it. Several years later, an unusual young child is acquired by Dr Alex Harmon for his magic research at the Institute for Paranormal Dysfunction. He sets Sara to hunting an imaginary creature, unaware it is both real and far more dangerous than anyone could know.

Sara, too, though, has her own hidden depths.

At the Institute she strikes up an unlikely friendship with Godsson, one of the world’s most powerful mages – and an inmate. But when Sara’s unique magic finally unfolds, Dr Harmon discovers the deadly consequences of creating an archetypal Huntress. While from a place far beneath reality, where Godsson helped slay the Enemy of Mankind, some thing, or things, have come hunting.  And their first targets are Godsson, and Sara.

CLICK HERE TO CHECK OUT MORE ABOUT WILD THING!