Bethany Anne returned to the President’s conversation.  Her conversations with ADAM and TOM were over so quickly he didn’t register a pause, “When you find a suitable computer to review the contents of the USB, I know you aren’t going just to plug it into any computer in your systems, you will find incriminating evidence.”

The President looked down at the USB he was holding, “Truly Pandora’s box, then.  I can’t say I’m happy with the present you’ve delivered.”

Bethany Anne shrugged, “Well, you could destroy it and go blithely on your way.”

“No,” he sighed, “I can’t.  I have a duty and however distasteful it is, I’ll see it done.”  He looked at her, “How do you handle stuff like this?” He asked as he lifted the USB and waved it a little.

“I have a group responsible for tracking down the truth and bringing those guilty to justice,” She admitted, wondering what the President would say.

“What about juries, judges, and the rest?”

Her grim face told him the answer, “Mr. President, in the harshness of space, you don’t allow stupidity.”  She wasn’t about to fess up regarding Barnabas and Tabitha.  “So, we have a strict policy.  While we aren’t a hundred percent effective, almost all of the people we have are focused on a bigger goal than just working for their own ends.  So, there is a significant amount of self-policing. Those that we miss?”  She paused, “They are warned, and they are adults.  We treat them as such.”

“You don’t have a strong opinion of our court system?”

“Do you?” She countered.

“Well, I think it is the best thing we have going at the moment.”

“Let me ask you a question, what are the two things that drive people?”

“Fear and greed, usually.” He answered.

“So, take that to the logical conclusion. At a certain age an adult will be driven by either fear, greed, or a challenge – something bigger than themselves.  Fear of repercussions for actions they have taken is a strong motivator for not doing punishable offenses.  If the system for punishment is broken, then the power of fear to stop actions diminishes, and you have more and more people shrugging their shoulders. However, people learn, quickly.  Greed can be considered in a good light.  I’m not talking about wanting more money, or power, I’m talking about being greedy or desiring something good in your life that benefits yourself and others.  What about the person who is greedy about wanting to be in space?  They have to prove themselves capable of deserving that position, of protecting not only themselves but others.  Everyone depends on what a person is willing to do to save everyone else.”

“That works when you take the best of society that wants to get ahead,” the President started.

“No, it works when you stop supporting those who do nothing.”

“That isn’t a very Christian attitude.”

She smiled at him, like a cat looking at a mouse. “Christian?  I’ll give you a few things to ponder, Mr. President.  Look them up when you have time.  ‘The appetite of the laborers works for them; their hunger drives them on.’” She continued, “And the best yet. A quote by the Apostle Paul, who said to those in Thessalonica, ‘We were not idle when we were with you, nor did we eat anyone’s food without paying for it. On the contrary, we worked night and day, laboring and toiling so that we would not be a burden to any of you… For even when we were with you, we gave you this rule: The one who is unwilling to work shall not eat.’”

She leaned back in her chair, “Do you have some idle hands?  Then dream bigger for your country, Mr. President, and give them something to use their minds, their strength and their abilities and stretch your people. Make them earn their keep, and then they will have pride in themselves. If some don’t?  Well, be a man and strap a pair on – if you need a pair you can borrow my ovaries.  Your infrastructure needs fixing! You have the ability to create work centers by the thousands.  You need to fucking dream bigger.  We are human beings, every one of us has worth, talents and skills.  Fucking put them to use! Stop taking the easy way out and punting the problem to the next generation. Don’t support a nation of people sitting on their asses and taking money from those who work without trying to make it better.  Make a change, even if it is starting the change before you step out of office.”

The President had nothing to say in response.  While he didn’t doubt she knew the difficulties of making this happen, she also wouldn’t care that it was a challenge.  He pursed his lips and nodded his head sharply.

She stood up and faced him, both hands held up as if in supplication, “Don’t give up, don’t accept mediocrity, don’t accept the status quo.  You’re the most powerful man on this planet.  Now, fucking act like it.”  She stepped backwards and disappeared right in front of his eyes.

It took the President a few moments to come to grips with someone disappearing right in front of him.  He pondered her comments, her challenge. He stood up and turned towards the door before stopping to look over his shoulder and whispered.

With that, the President turned back to open the door and admit to David he owed him a steak dinner.

FROM MICHAEL >> So, we are about two and a half chapters into the book (snippet wise).  I’m 55k into the story with about 1,500 words to finish before I work to give it to the editing crew. That means that the first 20 chapters are ‘in editing’.  For those that follow me, you know I try like crazy to stay ahead of them and when I finish.. I’m just as impatient to get THEM through the edits as you are to get the book out!

“Stephen, are you guys  finished yet?”

“No Mike, you just gave us 5 WHOLE CHAPTERS three hours ago.”

It isn’t quite that bad <yes it is – Stephen> but I do get anxious to push it out.  I have the cover, I will have the story and I’ll need to write the Author’s notes.  These will be my 14th Author’s notes and while sometimes it is rushed (like forgetting to write them until the story is DONE), they ARE like candy and I enjoy writing them.  There is no story, I just get to write whatever the hell is on my heart and in my head.

So, the book below is crazy different. The Forum group 20booksto50k did this little thing started by Kat Lind (you might recognize her name as the editor for a couple of the recently previous books when Stephen got so sick.) She is crazy smart, and also just crazy… quick.  As in, she likes to challenge herself when she gets bored (apparently a common occurrence) and one of her professional degrees (of 4) is in Industrial Psychology, but with a creative effort focus.  So, when she got involved in 20Booksto50k as a Beta Editor / Reader, it was like allowing a super smart scientist to mix it up with the type of people she happen to also be the types she … studies? Not sure that’s the right word.

Either way, about six weeks ago, she was bored.  What came out of it was a game, if you will, where she and her team at her company provided very specific items to pull out of a hat (remember the psychology part above) and then helped get all of the short stories pulled together into a book and released it.

You will recognize a TON of these authors in the book, as I have promoted many of them already! (If not all of them at one point or another).  Read the preview, I think many of you will not only be fascinated by HOW the effort was pulled together, but enjoy the stories as well. 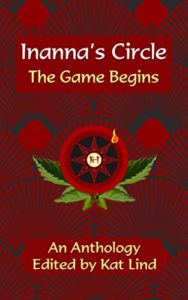 A tattooed dwarf, dark forest with winding road, a jewel emitting swirls of color… What can a group of writers create when they are presented with a mystery box of characters, snippets and scenes?

Pick at least one from each column and let your imagination soar! That is the challenge of Inanna’s Circle Game.

Eight authors accepted the challenge, writing in varied genres, some with many books to their credit, others with very few. The results are amazing! With vision and talent that shows the skills of the indie author and the way that

creativity can be sparked with the right flame, this anthology takes you to many worlds and introduces characters across universes.

Click Here to read the amazing story how this book came about!