QBS ArchAngel Over Japan – 16.5 hours before meeting in Japan

John shook his head as he walked into the Pod Bay, Gabrielle striding behind him, was continuing her tirade, “Why are you going instead of me or why not you and me?  At least answer that question you poor excuse for a walking mime.” she huffed in exasperation.

John grinned.  The last four hundred feet, all the way from the Bitch’s quarters he had been listening to Gabrielle’s constant complaining about John not taking her along. He allowed his go bag to slide off of his shoulder, and he put it into his Pod before turning around and looking down at the vampire, “Because, I’ve got one beautiful female to deal with out in public.  I don’t need two, especially since you just got nominated to be here to represent Bethany Anne.”

“Who the hell told you I was the best solution for that role?” Gabrielle retorted.

“ArchAngel, she said Bethany Anne would most likely nominate you, as you had the role when we all went to China.”  John continued his staring contest.

Gabrielle stared up at John for ten seconds, “Shit,” she finally spat.  Gabrielle turned around and started walking back out of the bay, “Don’t think I’ll forget this, John!” she called over her shoulder

John turned around, “No, that would make life too easy,” he agreed.

John heard Gabrielle yell right before stepping through the doors, “I heard that!”

John looked back to make sure the doors had closed, “Of course you did, that’s because you can hear an ant fart in a hurricane.”  John sat in the pod and started locking in, the Pod doors closing and sealing, “ArchAngel, how is Gabrielle?”

“She is telling me that I need to discuss ‘girls sticking together’ with her some time.”

John chuckled, “Does she not realized you could just as easily look like a guy?”

“Probably, but since my avatar is Bethany Anne, I doubt it comes to mind.”

“No, probably not.”  John finished clicking his straps, “Take me out.”  He paused before asking, “Why did you want her staying behind?”

“Because I’ve analyzed the data, John.  You will go and support Bethany Anne.  You won’t judge her, and you won’t condemn her.  In all things, you are her rock, and she leans on you.  You are the best choice.”

The Pod slipped through the gravitic shield into space.  In moments, it was streaking through space eighty miles above Earth.

“You might as well take me to the address, ArchAngel.”

“Understood, John.  You will arrive in eighteen minutes.”

FROM MICHAEL>>>  Ok, Beats are complete on the book (which means I have all of the scenes mapped out and installed on Scrivener, the software I use to write and publish the books).

Now, it is lots and lots of writing between me and publishing the book…and help from the Beta readers, editors, and JIT readers as well…subject matter experts, random internet research nights. You get the idea.

The cover is going to be done by Jeff Brown again, in fact I snagged him to work on all of Arc 2 covers.  Here was my direction for this cover: “Hey Jeff – the idea is the pretty, svelte alien research ship has been ‘upgraded’ and the new ride (the alien) spaceship is a bad-ass-bitch doing something…badass (what else do bad ass spaceships do?)”

That should be enough, right?  That was most of my suggestion (except a talked about a Kessel run through a meteor grouping shooting a bunch of rocks like it is on a practice or something.)  Let’s see what Jeff comes up with!

Now, Let’s talk JM Chaney.  Do you like dystopian?  Do you want a free book?  Mr. Chaney (or, his MIB friends just call him ‘J’) has the option to buy his book, or if you know the secret link, you can download it for free (you give your email for it to be emailed to you) here: http://jnchaney.com/stay-up-to-date/ 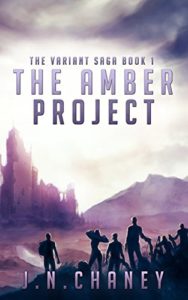 In 2157, a mysterious gas known as Variant spreads across the globe, killing or mutating most organic life. The surviving humans take refuge in an underground city, determined to return home. But after generations of failures and botched attempts, hope is beginning to dwindle.

That is, until a young scientist makes a unique discovery—and everything changes. Suddenly, there’s reason to hope again, and it rests within a group of genetically engineered children that are both human and Variant.

Terry is one of these children, modified and trained to endure the harsh conditions of a planet he cannot begin to understand. After years of preparation, Terry thinks he knows what to expect. But the reality is far stranger than anything he can imagine—and what he will become is far more dangerous.

CHECK OUT THE AMBER PROJECT ON AMAZON

Don’t forget, you can get it for free (email) here as well, two choices 😉 –