“She is a school helper?” Gunter asked, puzzled.

“American school’s get paid by how many children are in the classroom each day.  It is very expensive for local school district when a child is out sick.” Klaus explained as he walked into the room, adjusting his holster and slipping in his pistol.

“This could be a problem,” Dieter explained.  “We only need him to go to work one last time.  Do we snatch her, or what?”

Gunter shrugged, “We only do something if she won’t leave.”

The lady’s voice changed, sweeter somehow and yet more commanding, “Let me in, Mason.”

Mason shrugged, opened the door wider and stepped back, “Why don’t you come in, Ms. Anne.”

Bethany Anne stepped into the home behind Ashur who had jumped in ahead of her, looking around.  “My name is just…you know, never mind.”  She looked down at Ashur, “Find out if we have a problem.” Ashur took off, running up the steps as Mason shut the door.

“NO!” Mason scrambled behind Bethany Anne, pushing her out of the way as both of them heard a chuff from the room up the stairs.  Mason grabbed hold of the railing, swinging to jump to the third step. He was running up the stairs and was surprised when he stumbled off balance, like he was pushed aside.  He righted himself and continued racing to his daughter’s room.

“Gott Verdammt!” Klaus bolted out of the room, running down the hall to the front door. “If that bitch pulls the child off the bed, the operation is a bust,” he yelled, frantically trying to unlock the door.

Gunther and Dieter were hot on his heels as he yanked the front door open, all three men racing down the front sidewalk.

“ArchAngel, get me down there!”  John commanded as he started unbuckling.  The Pod came down screaming out of the sky.

The three men hadn’t made it to the street when the top of the house exploded.  They all turned, covering their heads, jumping back onto the lawn as house parts pelted them.  One larger piece of board impaled the grass just a foot from Gunter’s face.

Standing back up, pulling their pistols when the large flaming pieces stopped landing they turned back towards the home. There was flame pouring out of the top windows.

“Shit!” Klaus stomped his foot, “We were so close!”  They jogged over to the home’s front lawn

Dieter noticed the object falling from up to their left first, thinking a large part of the house was landing, and jerked his head, “Look out!”

Then men ducked. But nothing hit the ground.  When they looked up again, a large white man, vitriolic hatred painted on his face promising a painful death stood to their left in the yard, staring at them with two unique looking guns in each hand aimed at them.

The three men pointed their guns, “Who are you?” Klaus demanded.

“I am,” he responded, barely restrained emotions holding John in check, “the man who is going to kill you for who you just blew up.”

They eyed each other for a few seconds.

A woman’s voice came from behind the three.  It started low and slow, but raised in both pitch and volume as it continued, “You cock-biting-ass-backward-fuckfaced-sodding-tea-bagging-wrinkled-old-dickless-twin-headed-alien-tramp-wackers!”  She then screamed, “Flames fucking hurt!”

One of the three men turned around, the two facing John didn’t like the grin that graced his face, or his comment, “Boys, I was just going to kill you.  Now, you’ve done gone and fucked up real well.  You will have wished for death by the time she get’s done with you.”

The one on the left, looking back exclaimed, “The trophy wife?”

John snorted as the lady spoke in a clipped fashion, “You, I kill first.”

The white dog beside her barked. “No,” she said, “you may not bite his nuts off. I’m not smelling nut-sack breath all morning long.”

“Dieter, would you just shoot the bitch?” Gunter asked, “We have to get out of here!”

“Gentleman,” her voice went sweet, sweet velvet over hardened steel, “I command you, put down your guns.”

“Like…”  Gunter started to say before he felt himself complying with her command, “the hell?” he finished.

John, keeping his guns trained on them, walked over and kicked each pistol behind him.

“Bethany Anne, we do need to go.  Where are the people in the house?”

“Colorado,” She turned to look at her car, “Fucking ape-titties!” She yelled, exasperated, “That was my new Ferrari you cooch-virgins!”

John looked and had to agree. Her car wasn’t looking too good from the explosion damage.

She breathed slowly.  “Well, that settles it,” She walked to the man who was still looking at her.  “Hope no one has video going,” she mumbled and slapped him.  The slaps ‘crack’ was loud, but the man she slapped had disappeared

“What the hell?” Gunter exclaimed as he was hit in the back of his head and he disappeared.

She told the last, “Don’t say a fucking word.  And if you and your two goons want to live, I wouldn’t suggest walking much from where I send you.  Because I might not be able to find your useless ass.”

“Send me whe…,” was all Klaus was able to get out before the back of his head exploded in pain and he disappeared.

Ashur chuffed behind her, “Yeah, good point.”  She turned to John, “Pod?”

“Leave it.” She turned to look at Ashur, “Let’s go boy wonder,” Ashur chuffed, “No, I’m not your damned sidekick you four-footed walking rug.”  She reached out and grabbed John, “Now come here or I won’t get you a date.”

Ashur jogged up and chuffed to her again, “I don’t care,” she replied, “I won’t help you with any female and we won’t go on the Internet to search, either. So take that and chew on it, my dear opposible thumb lacking pain-in-the-ass.”

ADAM, find and destroy their surveillance equipment if you can.

What if it isn’t connected to the Internet?

>>I was surfing the radio waves…<

TOM, take care of the Pod and the car, please.

Doghouse for you, Alien for brains.

She could hear TOM’s snickering in her mind.

Grabbing Ashur, the three of them disappeared. The Ferrari took off into the sky, leaving behind a mess, a lot of questions, and not many answers.

FROM MICHAEL >>>  I know, I know…More Bethany Anne beating up helpless mercenaries, it’s so boring, right?  No?  You want more mercenaries introduced to the Queen Bitch?  Yes, well, let’s save that for next time 😉

Want something to play with today?  A little read before bed time perhaps?  Here is a book from our August Readers for Military list, but it was at the bottom (which, unfortunately, didn’t get as many eyes as those at the top). 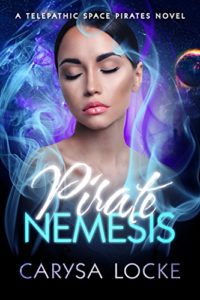 Mercy Kincaid is a fugitive from her own family. Her dangerous telepathic gifts make her a target. So is anyone she gets close to. When her best friend is captured and tortured, Mercy’s only hope is to reunite with the family that tried to murder her as a child. She trusts few among her blood relatives, but finds herself intrigued by an enigmatic and dangerous killer.

Reaper has spent a lifetime watching his people die. He’s vowed to kill anyone who jeopardizes their survival. Mercy’s gifts are the biggest threat they’ve faced in eleven years, since a biological weapon nearly annihilated the pirate colonies. But Reaper realizes her talents can either destroy them, or save them. He must decide if he’s fallen victim to her power, or if he can truly trust the beautiful woman and her compelling abilities. If he makes the wrong choice, everyone dies.

Pirate Nemesis is the first book in an ongoing science fiction romance series. If you like compelling world-building, fantastic characters, and sizzling romance, then you’ll love Carysa Locke’s new twist on an old genre.

CLICK HERE TO LEARN MORE ABOUT PIRATE NEMESIS ON AMAZON!