Patrick Brown, principal overseer of the operations side for Majestic 12 nodded to Dr. Eva Hocks as the two of them met at the elevator that went down to floor two-six.

Usually, the good doctor and Patrick would poke at each other, but never on the Quarterly meeting day.

“I hate this,” she whispered to him, as they both turned their keys and punched the separate buttons for the elevator to come up and get them.

Patrick kept his voice low, “This time Eva, I’m completely in agreement.  Whatever the benefits we gain from the technology advances is certainly offset by having to deal with them,” he nodded at the elevator doors, still closed.

Eva breathed in as they heard the elevator arrive, and the doors opened to admit them.  Both wrinkled their nose as the smell from section two wafted up the elevator shaft.  It was unpleasant and nasty.

It was alien, Patrick decided.

Patrick waved his hand out for Eva to go first.  She rolled her eyes, “Sure, be a gentleman when we enter the elevator to go down to the belly of the beast, why don’t you?”

Patrick stepped in behind her and turned, sliding his key in and turning it before punching in the code to go down.

“Well,” he admitted as they waited to go down the two hundred feet, “I don’t mind being a gentleman, but that puts me into specimen category with you, so I figured out a while back that specimen was a bad thing coming from you.”

“Is that why you are always a pain in the ass?” Eva looked over, not sure if Patrick was giving her a hard time again, or being honest.

“Um,” he paused before shrugging, “That’s probably truer than I care to admit, really.” He didn’t return her look.

Interesting, she thought, he seems uncomfortable.  I wonder what else causes this to occur?

“You are doing it again.”  He spoke, flatly.

“You are studying me, again.” This time he did look over at her, annoyance written on his face.

Eva thought back to what she was thinking and closed her eyes, “You can take the scientist out of the lab…”

The elevator stopped, and the doors opened as Patrick finished the phrase, “but you can’t take the lab out of the scientist.”  This time, he stepped forward and asked over his shoulder, “What the hell is that supposed to mean?”

Patrick stopped and waited just long enough for Eva to catch up before resuming his walk, “I mean, I get when you say you can take the guy out of the fight, but not the fight out of the guy or something similar, but a lab?”

Eva shrugged, desiring to chat even less as they went further into the level two-six.

“Lord, I hope we don’t have to speak with Ztopik,” looked behind them as he spoke softly, “the little guys are bad enough, but looking up into his pink eyes just freaks me the fuck out.”

“Would you please,” Eva hissed, “not speak about him down here?”  Patrick pursed his lips and nodded.  After another two minutes of walking down the hall, hewn from rock but having totally smooth walls Patrick and Eva came upon a door a little taller than most human doors would be.

Patrick nodded to the two little three-and-a-half-foot gray aliens beside the door.  Neither wore anything but a holster for their small pistol.  The pistols looked more like a black flashlight with three small buttons that each had three levels of destruction.

Level one sucked, three level three’s supposedly wiped your atoms from existence.  Fortunately, or unfortunately, the little guys didn’t have much in the way of self-awareness.  Most grays are hive-minded to a superior.  For now, Patrick had only ever met one superior.

They pushed the door open and inside the room, the walls, and 10-foot ceiling painted white, stood Ztopik.

FROM MICHAEL >>>  Well, here we go.  The first two (2) chapters are in editing, I’ve completed chapter 3 and will be working hard tomorrow to finish chapter 4 and possibly chapter 5 to deliver to Stephen Russell and team.

I get a little personal below, fair warning!

I’m both excited and have trepidation in sharing today’s Indie Author book choice.  Why? Because I’m going to provide a little personal background that needs to go with it.

I could proffer my Indie mention as I normally would, but I don’t want to do that to either you, or H. Claire Taylor  (I don’t know what the ‘H’ stands for, I’ve never asked her).  You see, Claire and I have a similar background in that both of us were raised in the Church (I’m non-denominational now, but was Catholic young and then Southern Baptist up into my early twenties.)  Both of us see a lot of things about our beliefs we like, obviously even love.

Religion, at least a lot about organized religion, is one piece we both are pretty disgusted with.  I’ve nothing against religion, I have everything against the people that abuse it for their personal gain – hurting a lot of us in the process.

Some of us very deep.

I know just enough of Claire’s background to know it was pretty hard.  Mine own issues had to do with heavy metal music, long hair, and an earring in my left ear while I rode my motorcycle. Didn’t exactly fit the Southern Baptist model for most churches at the time.

However, I was still the caring person inside that would read how we should be acting to others. But I would look around when I went to a HUGE megachurch that spent a million dollars on a pipe organ (this is the 80’s) and think to myself ‘that doesn’t seem to compute’. Was I disillusioned? Sure. I wasn’t turned off because I can tell the difference between what should happen, and what happens when people get involved.

My books are about justice.  You might remember a scene with the President where Bethany Anne expresses teaching from the Bible (I had expected to get some lip for that, but I never did.  I’m not sure if it is because most readers don’t care, or if readers share the same moral feelings I happen to believe… Or, it’s just a character talking.  I’m personally fine with all of those solutions).

I don’t preach.  It’s not in me and frankly it’s in the walk, not the talk anyway.  Let ones walking be ones talking and the earth might all get along a little better.

I say all of this to say this book is NOT the same as most I suggest.  It is funny, it is satire, but satire born out of a good heart.  For those who will be offended with God having a second child (a girl, this time) please don’t click below.  It isn’t going to be your cup of tea, I guarantee it.

If you think God has a sense of humor and is willing to just about allow anything so someone might think about Him? Oh, I don’t know, like rockers using heavy metal but singing about Jesus*?  Well, then read it quick before those who might want to burn the book figure out how to destroy digital copies 😉

Because, I’m going to plug the HELL** out of this book. 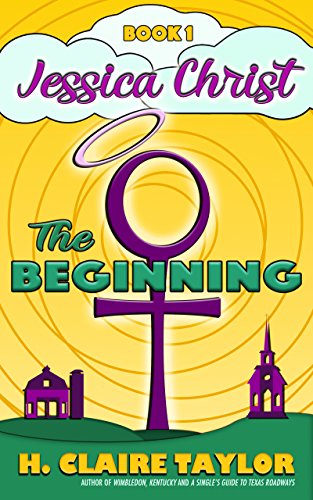 Jessica McCloud is God’s only begotten daughter, and she’s not super thrilled about that. Sure, she can smite and she knows juicy gossip about folks in her tiny West Texas town, but that’s about where the perks stop.

After a close call with a demon, Jessica decides that developing her ability to tell good from evil could be an especially useful survival skill for a messiah. But hopefully that can wait until, oh, high school?

Feel like the world’s gone crazy? You’re not alone. The Beginning is the first book in an epic satire series with unforgettable characters and the fresh take on politics, religion, and feminism that you’ve been waiting for.

**STRYPER’S “TO HELL WITH THE DEVIL” (Original Cover, ROCK IT!)