Eva pushed down her anxiety and smiled cordially, even if Ztopik’s pink eyes always caused her confusion.  She thought bunny rabbits, with piranha teeth whenever she and Patrick had to come down and have their quarterlies with him or his designate.  He had no teeth that she had ever been able to discern in that small slitted mouth he had.

“Welcome, Patrick, Overseer and Eva, Lead Scientist,” he spoke.  At over seven feet tall, his thin body barely had enough shoulders to drape the silvery robe over without it sliding down his body.

“Hello Ztopik, how do the studies go?” Patrick asked as the two of them took two chairs around a six-foot diameter white table, leaving the modified seat for Ztopik to use when he chose to sit down.

“As always, effectively if more slowly than I would prefer.”  His voice, a little musical, admitted.  Ztopik waited for the two to finish sitting before he pulled out the last chair and sat as well, adjusting himself in his robe. He looked back at the two humans, his eyes never blinking. “I come to understand that there are happenings up on the surface?”

Oh shit, Patrick thought.  He had hoped to keep everything about TQB out of Ztopik’s knowledge.  There had been a critical incident in 1979 with hundreds of people killed.  Killed easily, in fact. Patrick’s goal was a delicate balance of allowing necessary evil to occur to acquire the technologies needed from Ztopik and his people down here in the two levels.

“There are always happenings, but which one are you asking about?” Eva interrupted, her voice cracking.  Ztopik ignored her voice issues, and he was amused at how much she feared these meetings.  Fear is the ultimate indication you are a slave, not a master.

Ztopik feared nothing on this planet.

“I understand that the humans who have expressed they were in communications with aliens almost a hundred of your years ago have been communicating now with outside emissaries?”  The hairless white face went back and forth between the two humans.

“Yessss,” Patrick agreed, drawing out his answer to give himself time to think where Ztopik was going with this.”

“I want one of your people in the meeting.”

“Why?  Isn’t that dangerous?” Eva asked, her curiosity driving her.

Ztopik turned and stared at Eva for a moment, drawing out the silence.  The little power play irritated Patrick, but he and Eva had already argued about her fear for years, and it got him nowhere with her.  Ztopik liked to tweak Eva.

Maybe it gave him an alien version of a hard-on.  Who could say?

Eva mumbled something unintelligible, and Ztopik turned his head slightly before answering, “No, we have the ability to block Dr. Abesimmons memory of this location, and give him a proper cover story, so long as we have the time to do this.”

“You want him to go?” Patrick blurt out.  Of all the members in the human team, Abesimmons was the least likely to want to do this.

“Of course,” Ztopik answered Patrick, “he has a good cover, correct?”

“Well, yes,” Patrick admitted.  Hell, they all had good covers with the government.

“So, my people will protect his mind, and provide instructions on what we wish to know from those who provided the technology.  We shall find out if there is anyone here on this world providing the information she had, or not.”

“What people?” Patrick was confused.  As far as he knew, Ztopik was a singular leader.  He wasn’t aware of other aliens on Earth.  Patrick wasn’t even sure if Ztopik was a proper emissary, or he was his races version of a splinter group.  If there were more of his kind and their efforts, here on Earth that might be a problem.

“That is not known at this moment, Overseer Patrick.”

Ahhhh, shit.  Ztopik was using his title now.  That was equivalent to a parent saying a child’s full name when they called.

“I thought this was obvious?” Ztopik answered, “I wish Dr. Abesimmons to come down here, and then go on this trip with the American Government to Schwabenland to speak with Maria Orsitsch.  He will ask certain questions, and if she replies appropriately, I will know that we have a problem.”

“What problem?” Eva blurted out.

Patrick raised an eyebrow, what’s got her on edge?

“A name that will mean nothing to you, Dr. Eva Hocks.”

“Perhaps, perhaps not,” Patrick temporized, trying to get Ztopik’s attention away from Eva.  Her interruptions were annoying him.  Like a cat that was disgusted with a mouse trying to fight, instead of flee.

“We hear a bunch in all sorts of circles and efforts. Perhaps if we know this name, we will either recognize it or make sure to tell our people and our contacts to listen for it?”

Ztopik considered the statement then slightly lowered his head on his fragile looking neck, “You make a good point, Overseer Patrick. The name you and your team should be listening, or looking for…” Ztopik’s eyes, generally never an indication of any emotion, seemed to flash white before clearing to his usual pink.

FROM MICHAEL >>>  So, another snippet down ;-).  The book is shaping up to be a lot of fun.  Well, at least for me to write!  It’s time to close an arc but with three years in between books 13 and 14, a lot has happened that is going to be referred to, but I’ll need to write a short story, or two, before we find out the ‘what’ and not just the result (future writing!)

Today (October 26th) the first four Kindle Paperwhites will hit the Army’s Center for the Intrepid in San Antonio.  Thanks to YOU!  The income from August’s affiliate income was pretty much enough to cover the 4 Kindle’s.  What happens with Affiliate income is Amazon pays me an Amazon Gift Card and I turn around and use whatever is on the card to purchase the Kindles.  It’s kinda SWEET.

Today’s highlighted book comes from author Paul C. Middleton (Primary Author of The Boris Chronicles!)  as he brings out a new Urban Fantasy series.  I’ve highlighted it once on Facebook, but time to bring it to a Snippet ;-). 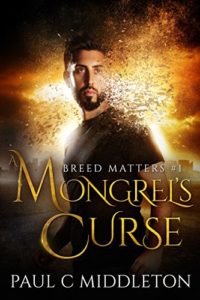 He’s the guy that gets sought after for the stuff beyond scary.

When the wannabes operating out of pubs can’t handle the problem? Sometimes, even the government comes calling.

When those that hunt the thing that go bump in the night become the hunted, he’s the one they call to bump back.

Nobody likes the guy because they don’t know what to expect. After all, he wakes up a new man every morning.

Then there’s the relatives. Being the grandson of a Fury wins him no popularity contests amongst those in the know.

He takes no favorites. Even his family pays for his help.

When there’s a screw-up others won’t touch? You go to the Mongrel.

Click here to read more about A Mongrel’s Curse (or buy it, that’s ok, too) 😉