Michael was frustrated, his lips compressed into a tiny line cutting across the horizontal plane of a face irritated with oneself.

“How does she do this?” he mumbled for the hundredth time, if he had mumbled it once.

Michael had been standing here what seemed like forever.  He knew he merely needed to take a step and he should be on the other side.  He should be…  He took another testing step, and dropped out of the grayness into nighttime on the side of a hill, falling through limbs, cracking two in the process as he slipped and tumbled twice head over ass.

“Gott Verdammt!” he cursed before his legs hit a low branch and twisted him radically turning him over to land hard, His breath exploded out of his mouth, his eyes open in surprise and pain.

He was now on the ground, laying on his back looking up into the branches of a tree above him, the moonlight caressing its branches.

“Oooouuuch,” he moaned, laying there a moment to collect his thoughts.

Michael reached towards his back and rolled to his left.  His right hand grabbed a small rock and yanked it out from underneath him.  He pulled it up in front of him and looked at it in the moonlight.  He opened his mouth to say something, but then shook his head and tossed the rock ten feet away to land in the bushes.

He listened for a second, not hearing anything or feeling anything dangerous.  Twenty feet above him, something silvery and translucent seemed to close slowly.

The silver expanse, he would later swear, snickered at him when it closed off, and the tree limbs behind it were now all he saw.

He was losing it.  He rolled forward and stood up, knocking the pine needles and other dirt and detritus off his body.

He looked around and snatches from a run came back into his memory.  He had a bag, a package.  NO!  He had a bomb.  He had been running to return it to someone who had attacked the…

Michael turned, looking up the mountain.  He had been running away from the base.

Michael took his first step in the moonlight, up towards the location where there should be a base.

A base … and answers.

FROM MICHAEL >>>  Well, we start again, don’t we?  Michael has made it back to the place on Earth he last left.  The problem?  This Earth is vastly different from the one he left.

Decades have passed, and the unthinkable has happened.  Now, those who have been risen in this time are focused on how to survive, it is what they have lived.  The UnknownWorld, while still staying in the shadows, have groups preying on the humans.  Additionally, there is a sickness that is afflicting the humans with each new generation…

The world needs help, it needs a savior that can help them learn how to treat those around them better.

The problem?  What they receive is the Dark Messiah and he has rarely been known to turn the other cheek.  The last time that happened, there was a woman involved

And she isn’t around at the moment…

JN Chaney (I just found out his real first name a couple of days ago…I was always wondering if I should call him “JN” or something else) is one of the Author’s I’ve meet in the 20BooksTo50k group who has been doing his own thing, and climbing the charts himself with his series THE VARIANT SAGA.

For those who have started his series, I’m announcing BOOK 03 IS OUT!  For those who HAVEN’T started it, well then click on the link and go check it out if you want some weekend reading! (Well, you need to finish by the 8th, just a suggestion for getting ready for when Michael makes a cameo BEFORE his book comes out DECEMBER 25TH, 2016   😉 ) 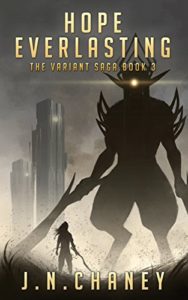 Terry is on the run, having escaped from prison and killed its overseer. He and his friend Ludo need to find a way to get to the northern border. That’s where Ludo’s wife is being held, but time is of the essence. If they don’t hurry, she’ll be sacrificed to the gods as part of some barbaric ceremony.

With an army at their heels and a continent to cross, Terry and Ludo will need all the help they can get.

Meanwhile, Mei Curie has opened a portal to another world…and it isn’t what she expected. There are worms the size of cars, animals with bulletproof hides,and an advanced alien race unlike anything mankind has ever witnessed.

Not to worry, though. Johnathan Finn has just the ticket: a rifle stocked with bullets, ready to deal with whatever threats come knocking.

Along with his team of soldiers, John is here for a single purpose–to find his missing friend and bring him home–but in a world as strange as this one, a simple search and rescue mission could prove deadly.