The door opened, and the massive amount of people already present in the room looked over to see Bobcat step in, closing the door behind him before he nodded a confirmation to Lance.

The room was large, well over thirty feet by twenty feet and had two places for people to come in and out.  One for those who were part of All Guns Blazing, the other for potential guests.

What it didn’t have was a marking or designation sign on the outside of the door.  This room was as close to being unknown as the group could make it.

Right now, it had a veritable who’s who of Etheric Empire notables sitting around a table inside of it.

Starting with Lance Reynolds and his wife, Patricia. Frank Kurns and Barbara Nickers, John and Jean, Eric and Darryl (Scott was on duty), Gabrielle, Stephen and Jennifer, Barnabas and Tabitha, Ecaterina and Nathan, William, Marcus, and now Bobcat finally made everyone that Lance had called very discreetly to meet him here.

Other’s couldn’t come because they had to make sure to do their best if Bethany Anne came around, looking for some of those missing.

Basically, they needed to lie their asses off if she came around, hoping she didn’t read their minds.

Now, thanks to Bobcat, he knew his daughter was having a discussion with Ashur, Bellatrix, and Yelena and he needed to get this meeting going.

“Thank you for joining me, it has come to my attention that we need to deal with a rather sensitive situation related to my daughter and one of her vices.”  A few eyes raised up around the table, not understanding what the Queen’s father was talking about.

Lance looked around and slowly nodded his head, “You guys and gals don’t see it, do you?”  He frowned, “Ok, I will lay it out.  She is about to have a birthday in a few weeks…”

Lance got interrupted by multiple people talking at once.  He put up his hand to quiet everyone down, “No, I don’t mean her human birthdate, I’m not that stupid.”

“She loves you and all,” Patricia patted her husband on the arm, “but she would kill you and I’d have to say I would understand.”

“If I could only be so lucky she would stop at that,” Lance chuckled. “I can only imagine what she could do that would be ever so much more painful.”

“Saint..” Bobcat started, before everyone at the table joined in with him pronouncing the creed, “Payback is a bitch!”

Everyone laughed as Lance just kept his lips pressed together and nodded his head in agreement. “Yes,” he admitted to the slowly quieting group, “Saint Payback WOULD be a bitch, so, I’m going to use the date TOM tells me is the closest to the actual date he would consider her turned.  Since even Bethany Anne doesn’t know…”

“Why wouldn’t she know?” Gabrielle questioned.

“Because she was under for so long,” TOM’s voice came out of a speaker in the wall.  A few turned in their seats before realizing what good was it to look at a speaker except to hear better?

TOM continued, “After the disaster of turning Michael, I felt that I should take my time and do it right.  I followed the changes and got lost in time myself.  Days and nights mean nothing when you are inside of a spaceship, so I didn’t follow them.  I’ve researched the information from inside my ship, and I’m pretty confident that the actual date of her conversion is the fourteenth of June.”

“So, we have a little time,” Gabrielle considered, tapping a finger on her lips.

“Bethany Anne has a vice?” Tabitha asked aloud, a few turning in her direction, “I mean, other than cussing?  Hell, she doesn’t even drink liquor that I can ever see.”

“Oh, she drinks it,” Bobcat replied, “It just doesn’t do anything to her Nanite body.  It will rip through the alcohol in the drinks like nothing. She doesn’t get drunk.” he finished.

John smirked and pointed at the man, “You DID try to drink her under the table,” Darryl and Eric started chuckling.

Bobcat shrugged, his face turning red, “Well, I had beaten so many of the Wechselbalg, I thought why not give her a try?”

“It was,” William agreed, “One of the first times I’ve ever seen him incapable of walking a straight line after a drinking contest.”  He put up two fingers and acted like they were walking in the air, the fingers swerving all around.

It was, Lance considered, very drunk pair of fingers.

“Which is to say,” Marcus interrupted, “We got it on video for research purposes, of course.”

“If it was for research purposes,” Bobcat jumped back in, “Then why the hell do you guys play it on a loop in the lab?”

William shrugged, straight-faced. “We are researching how long it takes for you to make a comment about it each time,” he looked over to Marcus who picked up his tablet and hit a couple of buttons on the screen.

Turning the tablet towards Bobcat, Marcus had a spreadsheet with a graph on it, “See?” He pointed to the left part of the screen. “Right here you can notice a sharp decrease towards the zero horizontal line.  It seems it took you about,” Marcus turned the tablet back to himself to look at it, “four days and twelve hours to get tired of the video.”

“Yeah, but we’ve had a bet …” William continued before Lance cut in.

“GUYS!”  They turned to the Leader of the Etheric Empires’ defenses, “Save it for later, ok?”  The three men nodded.

Bobcat stuck two fingers up, pointing to William, then his own eyes, then to Marcus and back to his eyes again before mouthing silently ‘we will talk later’ to the both of them.

William smiled, and Marcus tried to stifle a laugh.

Barbara, sitting next to Frank, asked, “You said vice earlier Lance, is she cracking or something?”

“Oh, nothing like that,” Lance agreed, “It’s just you know that we are about to leave the system and we need to get a jump on handling a potential problem before it becomes a real problem. I’m sure none of us want to see her suffer withdrawals.”

Lance looked around to all of Bethany Anne’s closest friends and allies before asking, “How are we going to solve her Coke addiction?”

FROM MICHAEL >>>  Ok, who didn’t think the Queen had an addiction?  I love that last phrase, and wonder just how many readers might get confused between Coke (Cola) and Cocaine?  I hope, by book 15, it’s precious few :-/

I want to step aside for a second and say that my success is NOT in a vacuum.  No, I’ve been supported at home (obviously, trying to accomplish what I have in just 15 months WITHOUT home support?  I don’t know…I wouldn’t want to try it) as well as fans, beta readers / editors, editors, fellow authors…well, the list could go on.

I do, however, want to set aside a paragraph to say ‘thank you’ to a person for helping me get through the dreaded burn-out phase of writing last year.  She happens to be an industrial psychologist who focuses on the industrial production of creative works (kind of an oxymoron, if you think about it – and I’m sure I’m screwing up exactly what she studies, but I digress.)  We’ve all been trained to believe that art is muse, whispery like the wind, unable to be captured, contained and studied.

Now, she has hundreds of papers and books and profiles on the non-fiction side of things but only recently through the loving support of her husband, John and those of us in the 20BooksTo50k group did the Research Scientist put down her clipboard and do that which she studied.

That can NOT have been easy.  It’s always one thing to know the numbers back and forth, it is completely another to place your creative endeavors out for others to read and based on their own subjective opinions cheer you on, or … not. While she might have all of the knowledge and (as far as I know) take any criticism with the aplomb of Spock, I have to think she is no different than me when hitting publish, biting her fingernails, looking above the desk and wondering…

Will it be liked?  Is it enough to continue getting these creative stories out for the world to see?

So, like any Indie Author who publishes, she has to work through the awareness aspect (marketing).

And I would like to introduce you to her.

We Are Not Prey 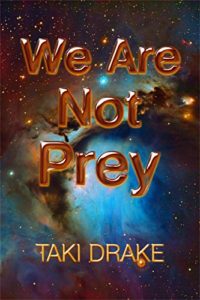 How DEEP is a mother’s love?

Can determination and honor carry you among the stars?

A story of loss and discovery, We Are Not Prey, balances the darkness of despair and the joy of new beginnings. This science fiction adventure blends magic and technology with the adventures of Ruth, a normal human, pushed into extraordinary situations.

Ruth’s transformation takes her from Earth to worlds and situations of which she never dreamed.