“Bethany Anne,” Merideth, the Operations E.I. for the QBBS Merideth Reynolds spoke up from the speaker. Although Merideth could have routed the information through ADAM, they tended to let it work like others expected. “Scott says he is ready to pass Yelena, Ashur and Bellatrix, plus their five children through if you are ready?”

Bethany Anne blinked again, then jumped out of her bed, rushed into her closet, sliding out of the nice suede shirt she was wearing to grab an old t-shirt and threw that on. Tossing off her pajama bottoms, she slid into a pair of leather pants.

Puppy nails can scratch, and if they happen to get their fur all over her, the t-shirt was much easier to wash or just ditch.  She couldn’t remember if the puppies would shed, but no use chancing it on her nice suede top she liked to lounge around in.

Walking back out of her closet, the closet doors shutting behind her as she wrapped her hair in a pony tail, she called out. “Ok, let them in.”  She passed through her bedroom’s doors to enter the more family type room in her suite.

Just in time to get ambushed by five German Shepherd puppies.

Two came at her from the front, two from the couch, jumping off the arms right behind each other and one was trying a sneak attack.

Scott, listening from the doorway but not able to see smirked when he heard a ‘YIP!’ of surprise, followed by another yip as it sounded to him one of the puppies had landed on the other.

“So, letting them in early are you?” Bethany Anne, now only two feet in front of her guard had caught his face full of glee.

“Aaaahhhh,” Scott started, but then Yelena’s voice, coming out of the suite’s meeting room, saved his traitorous ass.

“Oh!” Yelena came around the corner to see Bethany Anne outside her own suites doors, “There you are!”

“Hello Yelena!” Bethany Anne smiled and waved to the woman before looking Scott in the eyes. “Just remember, the Saint goes both ways,” she whispered as she walked past her guard into her suite.

There was a ‘chuf’ behind him and Scott turned his head and looked down at the large white Dog, “Yeah Ashur, I think we are both going to get it for that effort.”  Behind Ashur, Bellatrix chuffed as well and Scott smiled, “Yes, I know you told us, but it was funny, right?”

Bellatrix shook her head and turned around to go back into the room.  Scott shrugged to Ashur and turned back to watching the hallway.  Scott’s position there was a little ceremonial as anyone making down the long hallway through Merideth’s scans were already checked for damn near everything. But, the Queen’s Bitches would be here even if standing here was a completely superfluous action.

No one was going to see Bethany Anne, without at least one of the four checking them out, first.

“Take a seat, Yelena,” Bethany Anne pointed to the couch.  “Not you, white mountain of fur and fakery.  Get your hairy traiterous ass back up with Scott.  You two can console yourselves while the women figure this out.” Ashur chuffed, stuck his nose in the air and jogged back out of the room.

Bellatrix, Yelena’s all black German Shepherd that had been saved on an operation in Europe jumped up on the couch and Yelena sat next to her, with one of her legs on the couch, one hanging off.  Her black hair matching the female German Shepherds exactly.  Bellatrix chuffed and Yelena smiled and responded to her friend, “Yes, Ashur really didn’t want to stick around to chat about this, so he’s happy bullshitting with Scott up front.”

Bellatrix put her head down, and watched her five puppies roaming around the room.  Well, four of them did.  Matrix, one of the boys, all black except for four white socks sat next to Bethany Anne on the couch, watching the three of them talk.

Bellatrix chuffed to Bethany Anne who regarded the female, then slowly raised an eyebrow, “Your shitting me, right?”  Another chuff, “Seriously?  All five of them?” Bethany Anne looked up to Yelena who shrugged her shoulders.

“I know, right?  It’s like five individual little puff-balls who usually can’t agree on what they want to eat all zoomed in on one idea and now it is written in stone.”

Bethany Anne chewed on the inside of her cheek. “Where are they on their maturity level?”

Bethany Anne turned to look down at the black male who looked up at her, but whose eyes were vacant. “Why does he look like he isn’t with us right now?”

Bellatrix chuffed and the sense of someone was home returned to Matrix’s eyes.  He barked back at his mom and turned to Bethany Anne and turned his head sideways.  “Ok,” Bethany Anne spoke to the pup, “You got my attention, what is it Matrix?”

The little guy barked twice, “Uh,” Bethany Anne turned to look over at Yelena, her brow furrowing. “Ok, I get that the five little ones want to search out and find their human mates, but why is Matrix talking to me, but I don’t get the idea he is talking to me? With Ashur as my mate, wouldn’t that be wierd?”

There was a few moments of chuffing and high pitched barks, with an occasional lower bark from Bellatrix as the two ladies listened to the conversation between the dogs.

After a little while, Bethany Anne’s eyebrows went straight up.

Have you been talking with Matrix?

How are you doing that?

What …uh…what have you been talking about?

He likes to talk about space and being ‘out there.’

Yelena noticed the Queen was having an internal discussion and waited.  Then, Bethany Anne closed her eyes and put her head in her hands, “Is everything ok?” Yelena asked.

“Yes,” she answered, then changed her reply, “No.”

“What’s wrong?” Yelena asked, worried what could have changed Bethany Anne’s carefree attitude from a moment before.

There was a pause before Bethany Anne answered. “My resident Alien has acquired,” she peaked out from between her fingers, looking down at Matrix who was staring back up at her, his little tongue hanging out. “A four-footed friend who wants to go see space with him. Which means seeing space with me, too.”

Matrix sat back on his haunches a braced a little straighter before barking up at Bethany Anne.

So, can he stay with me? Tom asked his best friend in the Universe.

Bellatrix chuffed and Matrix turned to look at his Mom, and barked back.

“Ashur!” Bethany Anne called out to get her companion’s attention.

Scott called back into the room, “Sorry, he left a couple of minutes ago to grab something to eat.”

Bethany Anne slowly lifted her head and leaned back on the couch, allowing her head to rest back, and looked up at the ceiling, “That little shit knew,” she grumped after a moment or two, “I’ve been played.”

Yelena was able to successfully keep a grin off of her face, but Bellatrix chuffed and Matrix jumped into Bethany Anne’s lap.  She barely noticed him curl up in her lap as she absently petted the young German Shepherd as her mind was on a million other things as she stared up at the ceiling.

Yes, Yelena had to agree, you’ve been had.

How the hell, Bethany Anne was wondering, Does one have a ride-along alien that acquires a dog he can communcate with?  Who thinks this shit up?  Seriously, somebody needs to stop this damned asteroid, I need to get off…

Fuck my life… she thought as she realized she was petting Matrix and rolled her eyes in exasperation, One more fucking time!

I love how this time, it’s TOM that gets a puppy.  When the idea of having the Puppies find their partner (similar to Ashur finding Bethany Anne so long ago) and Yelena and Bellatrix (Their Story is HERE) I wondered just who was going to get matched up?  (BTW, puppies have been something my wife has been on me to do and having them all match up has been something Stephen Russell has been wanting to occur since last year… (Smirk – I mean, last year was just two weeks ago.)

Ok, some characters I thought were natural connections, but I didn’t think about TOM…you know, no body TOM?

But, I think Matrix will make a good partner for TOM and I’m curious where that friendship will go, myself.

Now, the last three (3) days have been killer.  We released the second Reclaiming Honor book, and today we are releasing the second Terry Henry Walton Chronicles book too!

Then, I’m heads down finishing up NEVER SUBMIT.

If you are looking for an awesome book or two, check out both series!  I think you will find you enjoy the new characters and the explanations about what is happening on Earth while Bethany Anne is checking into the stars.

If you find yourself confused on just when certain series exist in the timeline, don’t hesitate to look it up on this chart! https://drive.google.com/file/d/0BwImbYUAN598RVZ0dTZwRG9Oakk/view

This snippet, we are going to focus on the second book in the Reclaiming Honor series I did with Justin Sloan. 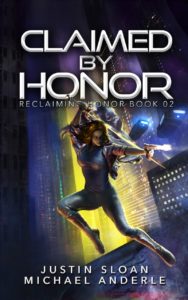 Michael has moved on, can his Justice Enforcer make a difference?

Does the Sun come up in the morning?

The New York City-State wakes up and their world has been shaken to its core. The Enforcers have been scattered, but they aren’t finished. This vampire is but a bump in their road to keeping the city-state in the hands of the CEO’s.

The Were’s are involved, some leave, some stay and new alliances are made and an old one broken.

However, in the end, it always comes back to heart and determination.

Something that you often have to find for yourself, when life beats you down and Valerie is made of the right material to see it through.

Check Out More about Claimed By Honor (or purchase it) Here at Amazon!