Shun smiled to the bouncer outside of the most famous bar on the asteroid, All Guns Blazing.  The bouncer, a large Were by the name of Tim that had been with the Wechselbalg group since the beginning nodded to the trio.  When Tim was at the door, rarely were there any problems inside the bar.

A few of those inside knew Shun, Zhu, and Jian.  While the Weres were interested in meeting Jian, Shun had learned that it was passed around the back channels to give the quiet Chinese man some personal space. Therefore, most Wechselbalg were polite, but not nosy.

Or you answered to one of the Queen’s Own.

As a genetic Werecat, Jian was a bit of an anomaly on the Merideth Reynolds.  Shun thought there might be two others on the ship, at least if the rumors were true.

Shun took the entrance that went into the bar side, as opposed to the more family oriented side and nodded to the bartender on his way to a tall side table, with three chairs around it.  The proprietors of this place didn’t believe in trying to shove too many people too close to each other.

Now that Shun understood the makeup of some of the people, and their propensity to fight?

It made a lot of sense.

Zhu and Jian were at the table, talking, when Shun pulled up his chair.  He had barely sat down when a waiter swung by and dropped two Snow beers on the table. “Xiè xie” Shun called out to the waiter who raised a hand over his shoulder to acknowledge the thanks as he deftly caught a bottle as it tipped over and grabbed another empty on his left as he walked to the bar.

Some of these people were so damned dexterous they should join the Royal Circus, he thought.

“We have news,” Jian spoke up.  Shun turned to his friend and raised an eyebrow. Stephen, the Queen’s confidant, had found out Jian was a Wechselbalg before his two best friends had known. Because of this, and even though he was incredibly reserved in his speaking, had somehow made the least likely to speak out of the three of them their liaison with the Etheric Empire.

Now, it had come down to the end. They needed to figure out and decide what to do, next.

“We have been provided the option of sticking together, choosing military jobs, or civilian jobs,” Jian told his friends.

“But, they have jobs for us?” Zhu asked and Jian nodded.  “Good, I’m getting bored,” Zhu commented as he looked around, “I’ve got to figure out how to pay my bar tab.”

Shun smiled.  Zhu was a hard worker from his country upbringing, and the three of them had been physically working out with each other, taking advantage of the many facilities available to those on the asteroid. Heck, they even had an area where you could enhance or reduce the gravity.  One time Jian wasn’t paying attention, and he moved the control to three Gs. It had been painful just to move.  Getting up off the floor would have been worse had Shun not thought just to call out for Merideth’s help.  The E.I. quickly returned the gravity to normal.

“First, let me confirm which way we are going, military or civilian?” Jian asked looked to his two friends.

Zhu shrugged his shoulders, “I’m not done paying those aliens back, yet. Those bastards started everything that ended up killing Bai, and they are still out there.” Zhu mentioned, pointed his hand towards the observation deck.

Shun nodded, “Agreed. I’m not satisfied. What is the English playwright say?  I’ve not had my pound of Kurtherian flesh, yet?”

“Ok, good thing you two agreed, because I already told them we were choosing the military.” Jian smiled at his two surprised friends and shrugged his shoulders,  “What do you want me to say? I’ve known you two long enough to finish your sentences.”

“How could you finish our sentences when you don’t speak a whole sentence?” Zhu asked as he picked up his own Snow beer, using it to point at Shun, “He talks, Bai and I argued and you chose to act like the silent and wise type,” he finished and took a swig of his beer. “God, I’m going to miss this when we transfer out of this area.”

“That’s because I am silent and wise,” Jian agreed. “Or, at least I’m still wise,” Jian admitted, “and I was wise enough to hear you confirm my smart selection before I told you, right?”

Shun picked up his beer waved it in Jian’s direction and took his swig of acknowledgment. “Ok,” he started, setting his beer down, “now that we understand you have been hiding your wisdom from us because you are a wise but selfish bastard, what is the rest of the news?”

Jian looked between his two friends for a moment before speaking, “I’ve been asked if I want to be upgraded to full Cat,” Jian laid it out on the table.  Zhu, who had his beer halfway up to his mouth stopped, and then lowered his beer  which chunked when it hit the table top.

None of the men spoke for a moment, “Options?” Shun asked.

Jian shrugged, “In the military here, there are different groups.  The Rangers, not our style.  The Guardians for Wechselbalg and the guardian Marines who back up the changelings. They form teams, and there are always two Marines with one changeling.”

Shun started slowly nodding while Zhu looked at him, confused. “So, Zhu and I would be the Marines?”

Jian nodded his head in agreement.

Zhu’s eyebrows had narrowed before realization hit, “So, we three would be a team?” He pointed to Shun, “You would change,” he pointed to Shun and himself, “and we would protect you?”

“Hell yeah!  You take a clawed hand,” Zhu said as he put his fingers out and slashed through the air, “and rip each Kurtherian a new asshole while Shun and I keep all the other bastards off your back.”  He looked over at Shun, smiling.

It was Shun’s turn to be confused, “You are okay with Jian being a cat?”

“What?” Zhu replied, “Why not? Wouldn’t you want to be a cat if you could? I might have shot them as often as I was able, they were the enemy after all. But you can be impressed, even envious, as you kill them, and look at how hard they were to kill! Never fail to appreciate what you can about your enemy, or you lose an advantage to them.”

“Sounds wise,” Jian answered slowly, “But why am I surprised this wisdom is coming from you?”

“Well, I read it.” Zhu explained, smiling, “But, it still fits.  Nevertheless, the bigger question is if you wish to do this Jian?”

Their little area grew quiet as Jian became the focus of his two friends, and after a minute he nodded his head sharply. “I’ve talked with my parents, and they agree.  It would honor Bai to take what the Kurtherians meant to use as a way to subjugate humanity and use it to keep humanity safe instead.”

“Well,” Shun smiled, “Seems like we have an agreement, what’s next?”

Jian shrugged, “We have to meet a small group of Guardians for a test.”

“So?” Zhu said, “What could be so hard about one more test?”

FROM MICHAEL >>>  A few fans had wanted to know what ‘became’ of the three honorable Chinese military men?  In this book, we will follow their experience…Especially to the point where they get a chance to try out for the Guardian Marines and the surprise that happens.  😉

Below, I have the link to the second Terry Henry Walton Chronicles book Nomad Redeemed, which is a collaboration with Craig Martelle.  It’s interesting, even though there is a female lead character in these stories, these books are harder to market than say the Reclaiming Honor series.

Personally? I think it is a issue w/ the covers (which we are addressing.)  The original ‘post apoc’ concept tends to put the focus on the guns and stark reality.  While this is a Post-Apoc book, I don’t think it shows the relationship between TH and Char as much as what really occurs in the books, and perhaps isn’t as female friendly a cover as what it needs to be?

Either way, we are in the process of hiring models for new covers and will be revamping them significantly in the near future.  For those who are already involved in the series (I really enjoy working on it, and by working on it I mean the conversations Craig and I have and then the editing phase I go through) thank you!

If you like relationship stories, with a purple eyed female Werewolf thrown into the mix, I think you will find this series (with one of my FAVORITE characters (“TH”) from The Kurtherian Gambit) to be a FUN ride…

If TH can just get over the fact that the woman he is falling for is a damned scary Werewolf! 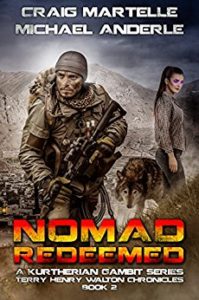 Sawyer Brown is no more, but he was just the minor opening act…

Terry Henry and Charumati (Char) have to deal with her Alpha coming back, the new refugees getting settle in the town and .. Beer!

With the FDG doubling in size, Terry Henry needs to bring about a little organizational structure to the group. While also deciding how to have that conversation with Char about her lineage…

Not sure how that is going to go, Terry Henry had better figure it out, or he is going to be up to his armpits in Werewolves and won’t be sure if he can depend on his one ace-in-the-hole.

Set in the Kurtherian Gambit Universe, Nomad Redeemed continues the Terry Henry Walton Chronicles, the time between the WWDE and the return of Michael to earth.

CLICK HERE TO LOOK AT BOOK 01 Nomad Found ON AMAZON