“Next question, how are we supposed to help? That’s actually a very good question.” Bethany Anne looked up to everyone, “First, I am opening up the opportunity for one to two resources from each of your countries to talk to our research team. We are also going to engage with your teams in relaying information we believe you might need to know. What you need to know, or more specifically your scientists need to know, will at the end of the day be my decision. Annoying pain in the ass scientists are just going to get booted out of here pretty quickly. So, I suggest if you want to know more information then you make sure that whomever you choose to send is not an arrogant asshole. We can decide whether to have the conversation up here on ArchAngel, or down on on the pretty blue ball in Australia. Provided the Australian government is okay with it, the more practical solution would probably be within Australia, otherwise I figure the scientists will be doing everything they can to disassemble my ship.”

There was significant chuckling and a little bit of laughter on the reality and the truthfulness of her last comment.

She looked back down at the next card as she allowed the laughter to die down, “What is the status of the Illuminati?” Bethany Anne looked up to the group and spoke, “Presently, there are two individuals we are tracking within the United States who have not accepted the opportunity to go to jail. My understanding is that they are close to making that decision. For most of the contacts around the world, they are already being punished via financial means. Mind you, these are legal financial methods. There is one outstanding individual who we are trying to locate. My sources tell me she has disappeared within the nation of China. Should we locate this individual, I am not going to ask permission from China whether or not she and I can have a conversation. Trust me when I say only one of us will leave the conversation.”

She slipped the card to the side, “What happened in Russia?  Well,” she said, “there is a splinter group of NVG who, supposedly, are operating in Siberia without the Kremlin’s approval. They killed a large group of descendants of political dissidents from a hundred years ago. A large group, about ten thousand, decided they did not want to live in Siberia any longer and because I have connections with a few of them, the question became whether we would accept them.  I agreed and provided the necessary transportation from right outside of Russia’s border.  The refugees are primarily either sixteen and younger, the parents of those children or older adults.  You can extrapolate how come the makeup of the refugees are split up that way, I’m sure.  We did not go inside Russia, they had to pretty much get out on their own.  Another example of trying to not mess up the apple cart too much when what I would have preferred would have been to descend right on top of their town and pick them up.”

She grabbed the next card and read it aloud, “Do you understand the rule of law?” Bethany Anne slid off of the table and put her hands behind her back and thought for a moment before speaking.

“Let’s understand the definition of, rule of law.  First, the rule of law is a legal principle that law should govern the nation, as opposed to being governed by arbitrary decisions of individual government officials.”  She pointed to the the first row of leaders, “namely, you right here, but I digress. The term primarily refers to the influence and authority of law in society, particularly as a constraint upon behavior, yours and others, and can be traced back to 16th century Britain. The main argument at the time was against the divine right of kings. For those who slept through their early history lessons, or frankly don’t care, those monarchs liked the idea of telling everyone what to do, were capricious and mostly self-serving atrocious bastards.”

She paused a moment and looked down the line, “My feeling is that those,” now she lifted up the card with the question on it, “who are wondering about this question would generally love to find out whether I’m going to follow some sort of international rule of law such that I will hold myself and my group to the whims, wishes and what-not of a bunch of lawyers, legalists and poor losers and the answer is not only no…”  she smiled to those in front of her, “But hell no!  There is no way that I see anything but a self serving, sycophantic, fuckwad of constraints, contracts and questions that would bedevil me with bullshit and generally irritate the hell out of me.”

She smiled to the group, “I am, believe it or not, generally an approachable person who believes in the rights of those born, and even the rights of the unborn.  I do not believe in holding someone hostage nor am I overly concerned with kissing anyone’s ass.”

She took a deep breath and exhaled, “Let’s cut to the chase, shall we?  You would love my technology, which I am not going to divulge.  You can’t hurt me militarily, because if I wanted I could drop a big enough rock on your heads to give your country a fucking migraine.” She pointed to the screen behind her, “You have seen why I asked you up here.  I don’t give a shit whether you help me, or not. My belief is it would be against my pledge to protect the Earth if I left you in the dark.  Now, the reality is I’m giving you a heads up.  If you decide to fuck up the heads up, it just means that you are sticking your head up your own ass.”

Spain leaned slightly to his right, “I see we get blunt, now.”  The American President nodded his agreement.

Bethany Anne continued, “I can be helpful, I can be harmful.  I’m here to be helpful so don’t push me.  While I intend to just ‘go away’ and take this fight somewhere else, I can’t do that right now because I don’t know where to go nor do I have enough knowledge of what is on the other side to feel particularly comfortable doing it without more intelligence.”

Bethany Anne continued, “Next option, try to hurt me financially.  I wouldn’t try that either.  China tried that, a few billion dollars of missing funds later they stopped that shit, too.  Between the twenty-eight of you here, I’m going to be candid.  I’m going to do whatever it takes to protect the Earth from what I know can be coming.  I don’t know if it,” She again pointed her thumb over her shoulder to the spaceship, “is part of the group I’m most concerned about or not.  Once I can find the son-of-a-bitch we will have a chat.”

“Who died and made you the decider of the Earth’s future?” France spit out.

Bethany Anne’s head slowly turned to France’s Prime Minister, “Considering that you can’t keep your own house in order, and protected, let’s not be getting full of ourselves, shall we?”  She walked over and stood in front of him, “I feel for your countrymen, and those that attack you are damned to hell.  Don’t assume because I harbor sympathy, I’m incapable of making a judicious decision that you are incapable of dealing with something outside your borders.”

Bethany Anne turned back around and walked to the table before looking back to those in front of her.  “People, you are on the QBS ArchAngel.  This is our Leviathan class Battleship.  The QB in QBS and in TQB stand for the same thing.  My group is a Monarchy.  It is complete, there is no House of Commons, House of Lords or anything else.  While I have advisors, my word is law.  You need to understand it. You need to own it!  My people follow me of their own free will. There are two meanings for QB.  The first is Queen Bethany Anne.”  Her eyes turned hard, unyielding.

“The second, may you never meet her, is Queen Bitch.”

FROM MICHAEL >> Okaaaayyyy…Seems like Bethany Anne doesn’t want to have any misunderstandings with the other government leaders. What we would call here in the South a ‘come to Jesus meeting.’

Sometimes, disagreements aren’t always solved by blowing shit up (although, you have to admit that stuff is fun to read about).  I think Bethany Anne is being herself.  She feels it is right to inform the leaders and we shall see what happens if they be their typical … obtuse … selves 😉

For todays book selection, I’m grabbing (and will grab many choices from our latest newsletter selection) Till Death.  Why?  Because I like the premise, of course!  It’s $0.99. 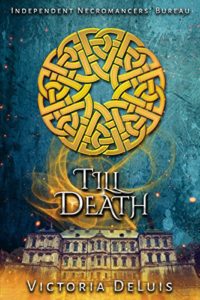 In a world where rogue necromancers control the dead and turn them against the living, The Independent Necromancers’ Bureau works to keep law and order.

CLICK HERE TO FIND OUT MORE ABOUT TILL DEATH