The lights were out in her little two-bedroom efficiency apartment.  Anna Elizabeth stepped inside and put her purse down.  It had taken her many many months to locate a company that was willing to ignore the silent, but powerful, word in the higher circles that she should not be hired.

By the time she was at her twenty-second job interview, she had decided to tell the companies up front that powerful people were upset with her.  Nine times it had only taken twenty-four hours or less for the word to come down that, “Sorry, we aren’t interested.”

This time, the tenth time, the lady on the other side of the desk nodded sagely and turned to her computer.  She typed in a few characters, pointed on her screen to read as she swiped her finger down the screen and then grabbed her mouse and clicked a couple of times.

She filled out two more fields and clicked again before returning to face Anna Elizabeth.  By then, Anna had been positive that she was about to be told that ‘all positions had been filled, so sorry’ or something similar.  The lady, however, winked to her.

“I have access to the bulletin board you are talking about and you are correct, your name is one of the entries.  Did you know that over twenty-six companies have not hired you because your name was listed?”

“No,” Anna admitted, “I wasn’t sure how many, but I had figured that my skills would have been useful to most of them so I figured at least ten.”  She sat back in her chair, defeated, “So, I’m basically unhireable here in my own country?”

“Oh, dear,” the older lady gave her a sad face, “perhaps for ninety-nine percent of the medium and larger companies that is true.  Any company that wishes to play with the biggest companies, unless they are even bigger, can’t buck the system without losing millions of dollars in potential sales.  Any professional company selling their services, such as ours, if we hired you ignorantly, will eventually receive a call that explains we need to let you go, or risk our projects which feed our own children.”

The lady smiled sadly to her, “Sweetie, you have been black-balled.”

Anna had nodded her head in understanding, “I understand.  Thank you for telling me the truth.”  The phone rang and Anna started to get her stuff together.

The older lady looked at the name and opened her eyes, “Hold one second, sweetie.  I wasn’t expecting to get this call, and if it happened not so quickly.”  She picked up her phone, “Hello, this is Amanda.”

Anna watched the lady, confused.  If she was blackballed, why did she ask her to stay?

“Yes ma’am, that is correct.  Yes, I know who you are, and your position.  Yes, I would be very proud to make that happen.”  There was a pause for a few seconds before Amanda’s voice became surprised, “I’m sorry?  Did you say twice, ma’am?”

Anna couldn’t understand why the lady’s face was so joyful, or why she was dabbing at her eye with a tissue she had snatched from a blue box sitting on her desk.

“Yes, I’ll let her know, and thank you.  Yes, you have a nice day, as well.”  Amanda slowly hung up the phone and sat staring at it for a moment.

“Excuse me?” Anna spoke quietly, then again when Amanda didn’t respond, “excuse me?

“Oh!” Amanda blushed as she turned back to face Anna, “My apologies.  I was just rather shocked with who was on the phone call and what I was just told.  But, that is bad manners on my side,” she put her hands together and sat them on her desk.  “That was, interestingly enough, the bosses, bosses…boss,” Amanda looked up in the air, as if she was looked at an org chart only she could see. “Maybe there is one more boss in there, somewhere.”

“But, I thought you were a privately held company?” Anna asked, trying to figure out where this conversation was going, and how it had gotten off track so badly.

“Oh, we are,” Amanda confirmed, “but, we are privately owned by another company, which is, in turn, owned by an International Conglomerate.”

Anna’s stomach clenched up, “You are owned by an International Conglomerate?” she whispered as Amanda beamed back.

“Oh yes!  We are owned, eventually once you get up the chain, by TQB Enterprises.  That,” she pointed to her phone, “was the CEO herself.”

“Oh… I see,” Anna Elizabeth answered and she did.  That was the ultimate person that her previous employer had attacked.  She had tried to warn them as best she could.  So far, her biggest concern was that she would be killed for divulging a secret held in her country for a millennia. Then, after so many failed job interviews, her concern had changed.

A few minutes ago, she had been thinking she would starve to death, now it might be her preferred way to die.

“Oh yes!” Amanda went on, not realizing Anna Elizabeth’s thinking was down a separate path, “She told me to ignore the, well, let us just admit she can be a little blunt with her talking and she told me anytime I find someone on that list to feel free to bump it up to her attention.  Either way, you’re hired!”

“Ok, I’ll just grab my stuff and…wait, did you say I’m hired?” Anna asked, confused even more, “The bosses’ bosses…well, the CEO just told you to hire me?”  Her emotions and her thinking were not coherent at the moment at all.  Why would Bethany Anne want her hired?

“Oh yes!  In fact, if I can negotiate a proper salary and position for your true skills, I will get a bonus worth twice my salary on my next paycheck.  So, please, sit your little butt back down and let me find out everything you can do!”  Amanda told her.

Now, Anna was reveling in the freedom for her toes as she pulled each foot out of her pumps.  The shoes had been a little high, but she was trying to use any asset she had.

And dammed if these assets didn’t hurt her feet each time she wore them.

She reached over and clicked on the light in her little place and turned around, “Oh!”  Her hand reached up to cover her mouth as her eyes darted between the two people waiting for her in her apartment.  She didn’t recognize the man, but she absolutely knew the woman.

The black haired lady smiled to her, “Don’t be afraid, Anna Elisabeth Hauser, you are working for me now.”

FROM MICHAEL >> Hustle.  That is the word of the day right now and I’m terribly impressed with everyone that hustles… It could be to get to class and learn, to figure out something they don’t know, or working two jobs to feed their kids.  We all NEED to hustle, and my hats off to everyone that hustles whether the success has happened, or not.

This latest book offer is completely due to hustling (you knew that was coming, right?) I received a Facebook message (easiest way to get me) this Monday – 4 days ago – at 9:50PM.  The author, C.E. Wilson reached out with a message on Facebook.  This is what she sent me: “Forgive me Michael if this is totally random, but i keep seeing your name pop up in some of the author groups that I really follow and trust, and I have to ask, do you promote authors or Sci fi books? Please correct me if I’m wrong. Lol. I’m just curious.”

Now, this happened only a few days after the latest Kindle Paperwhites newsletter went out, so she missed that opportunity.  She was very polite and I promised I would get her into the mix.   Once I went to look at the book (She has 10+) I loved the comments and she really, really is working her craft.

IF YOU ARE INTO ROMANCE – please check out C.E. Wilson’s latest work…she has EARNED your attention by hustling hard and asking politely.  Now, let’s check out the book, shall we? 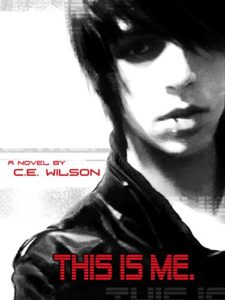 What really makes a person a person?
Is it a ticking muscle inside their chest, or is it something more?

With Rogan doing everything in his power to prove that his thoughts and feelings are real and Niven trying to persuade her to abandon her robot and have a normal human relationship, Chloe is trapped between the two things that mean the most to her. Does she embrace her relationship with the blond newcomer, or face that her Asist’s feelings may be more than features of his programming?